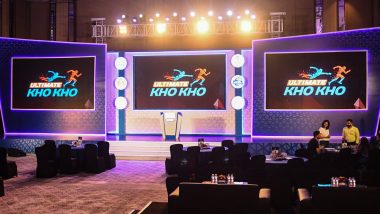 The much-awaited first edition of the Ultimate Kho Kho (UKK)  is set to be held this year and will be played from August 14, 2022 to September 04, 2022. Six teams will compete in the tournament with hopes of becoming the inaugural champions as they face each other in gripping action at the Balewadi Stadium, Pune. Ultimate Kho Kho 2022 is yet another franchise-based league competition in India and will be the first ever for the sport of Kho Kho. The league is promoted by Amit Burman, Chairman of Dabur India, in collaboration with the Kho Kho Federation of India (KKFI). Teams from Chennai, Mumbai, Gujarat, Odisha, Rajasthan and Telugu will take part in the competition. Odisha Govt Joins Hands With Ultimate Kho Kho To Own 5th Franchise.

The schedule for Ultimate  Kho Kho League 2022 has been announced yet and the tournament will be held from August 14 to September 04.

The tournament will be broadcast on Sony Sports Network. Fans can tune into the Sony Sports SD/HD channels to watch the telecast of Ultimate  Kho Kho 2022 on their TV sets in India. Meanwhile, SonyLIV will provide the live online streaming of the games.

(The above story first appeared on LatestLY on Aug 10, 2022 06:04 PM IST. For more news and updates on politics, world, sports, entertainment and lifestyle, log on to our website latestly.com).