Who is Ravi Kumar Dahiya? Here Are the Five Facts About the Wrestler and his Journey to Tokyo Olympics 2020 Wrestling Final

The 23-year old from Haryana on Wednesday, staged a memorable comeback win over Kazakhstan's Nurislam Sanayev to make his way into the finals of the Men's freestyle 57kg boxing event at the Tokyo Olympics 2020. He assured India of a silver medal in the ongoing Tokyo Olympics 2020. 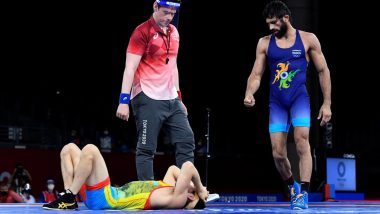 Ravi Kumar Dahiya is a name that Indians or even the wrestling community aren't going to forget very soon. The 23-year old from Haryana on Wednesday, staged a memorable comeback win over Kazakhstan's Nurislam Sanayev to make his way into the finals of the Men's freestyle 57kg boxing event at the Tokyo Olympics 2020. By doing so, he became only the second Indian wrestler to make his way into the finals of a wrestling event at the Olympics after Sushil Kumar, who had won silver in 2012. He also has assured India of a silver medal at the Olympics this year, adding to the nations' tally of two bronze medals and one silver so far in the ongoing Tokyo Olympics. Ravi Kumar Dahiya Assures Another Medal for India at Tokyo Olympics 2020, Family and Friends of Wrestler Celebrate in Haryana (Watch Video)

His victory is indeed a special one but what made it even better was that he was trailing 2-9 at one point in time. But Dahiya didn't let his Kazakh opponent exert further dominance over this match as he eventually ended up securing the win by pinfall. But it wasn't just one good match for the 23-year old. He has been in dominant form throughout the event. When is Ravi Kumar Dahiya Next Fight? Get Indian Wrestler's Next Wrestling Match Date and Time for Olympic Medal at Tokyo 2020

His first win was against Colombia's Oscar Tigreros, who he defeated 13-2 in the Men's Freestyle 57kg 1/8 finals. In the next stage, he faced up against Georgi Vangelov and once again, dominated his way to a 14-4 win. His biggest challenge was from Sanayev in the semifinals, who he trailed 7-9, but won the match by pinfall to book a place in the final on Thursday, August 5, where he would face Russia's Zaur Uguev.

So who is Ravi Kumar Dahiya? Let us see some facts about him:

1) Ravi Kumar Dahiya became only the second Indian wrestler to qualify for the finals of a wrestling event at the Olympics after Sushil Kumar, who won silver in the 2012 London Olympics,

2) He has been wrestling since the age of 10! Yes, you read that right. Dahiya trained under Satpal Singh, who has coached greats like Sushil Kumar.

4) He won bronze in his World Championship debut in 2019, which earned him a spot in the Indian team for the Tokyo Olympics. In the round of 16 clash, he got the better of Arsen Harutyunyan, who was the European champion. He defeated Yuki Takahashi in the quarterfinals to secure Olympic qualification. Dahiya however lost to Zaur Uguev in the semifinal. He faces Uguev tomorrow in the Olympics final!

5) He also won the gold medal in the 2020 Asian Wrestling Championships.

Ravi Kumar Dahiya would have a point to prove against Zaur Uguev when they face each other in the final of the Men's 57kg Freestyle wrestling event at the Tokyo Olympics. Indians all around the world would definitely root for him to win the coveted and much-awaited long medal but regardless of the result, he has already joined the list of one of India's Olympic heroes as he has shown that the possibilities are endless if learns to believe in the darkest of times.

(The above story first appeared on LatestLY on Aug 04, 2021 05:26 PM IST. For more news and updates on politics, world, sports, entertainment and lifestyle, log on to our website latestly.com).