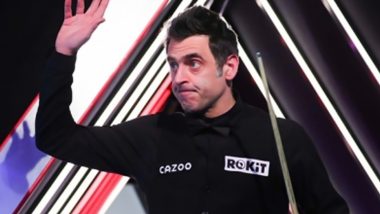 London, May 3: Ronnie O'Sullivan beat Judd Trump 18-13 on Monday to win the World Snooker Championship title for the seventh time, equalling the record held by Stephen Hendry. The world number one returned to the table on Monday evening with a 12-5 lead from Sunday, but the 2019 world champion Trump fought hard to close the gap within three frames at 14-11. In the final session, the Rocket dominated the table again, winning the world title at the age of 46 to become the oldest champion in the season-ending tournament, Xinhua reports. Glenn Maxwell Could Still Be in the Test Mix in Sri Lanka, Says Aussie Coach Andrew McDonald.

"That's probably the greatest result I've ever had," O'Sullivan told the World Snooker Tour website after clinching his 39th ranking title. "As far as I'm concerned, Judd is already an all-time great. The way he plays the game, he plays such dynamic snooker." O'Sullivan took his first world title in 2001 by beating John Higgins in the final. After more than two decades, these two great players are still in their top forms as they met in the semifinals at the Crucible Theatre this year with O'Sullivan outplaying his long-time rival 17-11.

(The above story first appeared on LatestLY on May 03, 2022 11:11 AM IST. For more news and updates on politics, world, sports, entertainment and lifestyle, log on to our website latestly.com).