The first US private astronaut mission to the International Space Station (ISS) has returned to Earth. 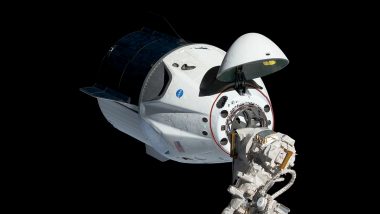 Los Angeles, April 26: The first US private astronaut mission to the International Space Station (ISS) has returned to Earth.

The private astronaut mission returned to Earth on Monday. The SpaceX Dragon spacecraft splashed down off the coast of Jacksonville, in the southeastern US state of Florida, at 1:06 p.m. Monday, SpaceX confirmed.

The crew undocked from the ISS at 9:10 p.m. on Sunday, completing the first all-private astronaut mission to the orbiting laboratory, Xinhua news agency reported. The four-person multinational crew is composed of Commander Michael Lopez-Alegria and Pilot Larry Connor of the United States, Mission Specialist Eytan Stibbe of Israel, and Mission Specialist Mark Pathy of Canada. First US Private Astronaut Mission To International Space Station To Return on Sunday, Says NASA.

"The success of this first private astronaut mission to the International Space Station is an important step in opening opportunities for space travellers and achieving NASA's goal of enabling commercial business off the planet in low-Earth orbit," said NASA Administrator Bill Nelson.

"This progress has been made possible by NASA's work with private industry -- especially the Commercial Crew Program," he added. The mission, codenamed Ax-1, was launched on SpaceX's Falcon 9 rocket from NASA's Kennedy Space Center in Florida on April 8. International Space Station Will Plunge Into Pacific Ocean in 2031, Says NASA.

The crew spent 15 days in orbit, conducting a variety of science experiments and technology demonstrations, including research on cancer cell growth, a demonstration testing a new air purifier for station use, and a study utilising swarms of autonomous tiles for future applications of in-space construction, according to NASA.

Following the splashdown, teams will retrieve science aboard the Dragon spacecraft and transport it to nearby Kennedy Space Center for further investigation.

(The above story first appeared on LatestLY on Apr 26, 2022 08:46 AM IST. For more news and updates on politics, world, sports, entertainment and lifestyle, log on to our website latestly.com).