After the independent Oversight Board upheld Facebook's decision to ban Donald Trump, the former US President slammed the move as a "total disgrace," saying the Big Tech companies "must pay a political price." 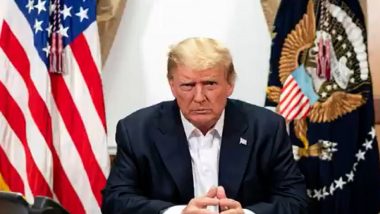 Washington: After the independent Oversight Board upheld Facebook's decision to ban Donald Trump, the former US President slammed the move as a "total disgrace," saying the Big Tech companies "must pay a political price." Trump slammed Facebook, Google and Twitter and called them "corrupt", saying these social media companies "must pay a political price, and must never again be allowed to destroy and decimate our Electoral Process." Banned on Facebook & Twitter, Former US President Donald Trump Launches His Own Communication Platform.

"What Facebook, Twitter, and Google have done is a total disgrace and an embarrassment to our Country," Trump said in a statement posted to his new communications platform on his website. "Free Speech has been taken away from the President of the United States because the Radical Left Lunatics are afraid of the truth, but the truth will come out anyway, bigger and stronger than ever before."

The Board found that Trump's posts severely violated Facebook's rules, and his words of support for those involved in the attack on the US Capitol building legitimised violence in a situation where there was an immediate risk to people's lives.

"President Trump's actions on social media encouraged and legitimised violence and were a severe violation of Facebook's rules," said Thomas Hughes, Director of the Oversight Board Administration. "By maintaining an unfounded narrative of electoral fraud and persistent calls to action, Mr Trump created an environment where a serious risk of violence was possible. Facebook's decision to suspend the President on January 7 was the right one," Hughes added.

While the Board concluded that Trump should have been suspended from Facebook and Instagram, it also found that Facebook failed to impose a proper penalty. The Board stated that within six months of the decision, Facebook must reexamine this arbitrary penalty and impose one consistent with its own rules. The decision came as the former US President launched a new so-called social media platform, which is actually a WordPress blog on his own website.

(The above story first appeared on LatestLY on May 06, 2021 04:49 PM IST. For more news and updates on politics, world, sports, entertainment and lifestyle, log on to our website latestly.com).