Google Pixel 3a, Pixel 3a XL Launching in India on May 8, 2019; Teased Online on Flipkart Ahead of Official Launch 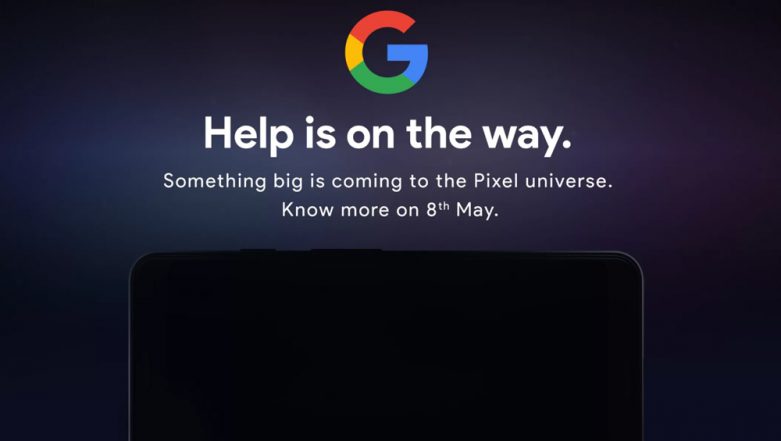 The affordable derivatives of Pixel 3 flagship smartphones - Pixel 3a, Pixel 3a XL are one of the most awaited devices in the Indian market. With the increasing demand for affordable premium smartphone handsets, Google is also looking to introduce its contenders that will be pitted against Apple iPhone XR, upcoming OnePlus 7, Samsung Galaxy S10e and others. If the market reports are to be believed, Google could be launching the new Pixel 3a and Pixel 3a XL devices in India on May 8. Now Flipkart has listed the new phones online ahead of its official launch, which states ‘Help is on the way’, ‘Something big is coming to the Pixel universe” on May 8’. Pixel 3a New Leaked Image Reveals Design of Google's upcoming Affordable Premium Smartphone; Likely To Be Launched on May 7.

It is important to note that the phone maker might unveil the new Pixel 3a, Pixel 3a XL devices at Google’s I/O developer conference 2019 on May 7. The conference will be held in US on May 7, which is technically May 8 in India. So, it is speculated that the affordable Pixel 3 devices will go official during the same time on Flipkart. To recall, Google accidentally revealed the launch date of the smartphones last month, stating ‘On May 7, meet a new hero’.

In the past few months, we have seen endless leaks of Google Pixel 3a and Pixel 3a XL. The latest leak revealed a faded purple colour version of the device courtesy of Evan Blass. Previous render images revealed black and white shades of the upcoming Pixel 3 devices. Google Pixel Lite Aka Pixel 3a Smartphone Accidentally Leaked On Official Website Ahead of Launch.

We’ve got some big things happening in May. Sign up now to stay in the know: https://t.co/mkN3w78wWv

The new Pixel 3 range is expected to offer same camera experience as that of the current flagship series. So, we can expect 12MP single camera at the rear with AI capabilities. Under the skin, the phones are likely to be powered by Qualcomm Snapdragon 670 instead of Snapdragon 845 (seen on Pixel 3, Pixel 3 XL). The chipset is rumoured to be mated to 4GB of RAM along with 32GB and 64GB internal storage. The upcoming Pixel 3a smartphone is likely to feature 1080p FHD+ display. OnePlus 7 Pro's Triple Rear Camera Officially Teased Ahead of May 14 India Launch.

Some reports claimed that Pixel 3a XL smartphone will be shipped with Qualcomm’s Snapdragon 710 SoC whereas Pixel 3a will be powered by Snapdragon 670 chipset. The smartphone will run on the latest version of Android 9 Pie OS out-of-the-box. To be held at Shoreline Amphitheatre in Mountain View (California), the Google I/O developer conference 2019 will kick-off on May 7 and will run till May 9. Apart from affordable Pixel 3a devices, the company might also announce updates for Android, Google Assistant and much more.