Huawei’s first Foldable 5G smartphone will be called as Mate X, which will be launched at Mobile World Congress 2019. 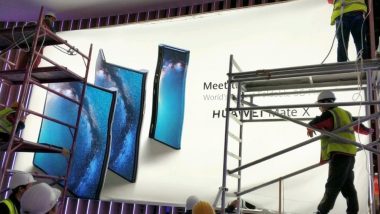 As Samsung unveiled its Galaxy Fold earlier this week, the race for the foldable smartphones is on. Huawei is another smartphone manufacturer that had been working on the foldable devices. It was previously reported that Huawei will be launching its first foldable smartphone at the upcoming Mobile World Congress (MWC) 2019. Ahead of its official launch, a poster image of Huawei's foldable device has been leaked online, that is seems to be captured at Huawei's MWC press event venue preparation. MWC 2019 Will Be All About Flagship, Foldable & 5G Smartphones; Huawei Will Launch First Foldable 5G Smartphone.

Initially posted on Chinese social media, the poster image later made its way to SlashLeaks and then on Twitter. However, there is not much clarity how the source got hold of this image, but this leaked picture seems legitimate. It is believed that Huawei will reveal its 5G vision at the MWC 2019 in Barcelona along with some new consumer products. Moreover, it is also speculated that the company will not be focusing on Huawei P30 as the fact that the device will be revealed on March 26, 2019 in Paris. Apple Might Launch First Foldable iPhone in 2020; Patents For Foldable Smartphone Submitted.

(The above story first appeared on LatestLY on Feb 23, 2019 11:51 AM IST. For more news and updates on politics, world, sports, entertainment and lifestyle, log on to our website latestly.com).