BBK Group-owned iQOO 7 and iQOO Neo5 has reportedly received the BIS certification and now gearing up for their launch in the Indian market. A tipster Abhishek Yadav has shared a couple of screenshots on its Twitter handle. 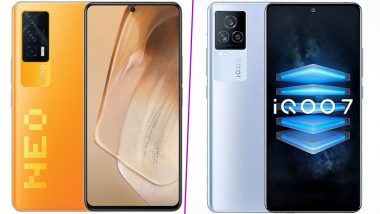 BBK Group-owned iQOO 7 and iQOO Neo5 have reportedly received the BIS certifications and are now gearing up for their launch in the Indian market. A tipster Abhishek Yadav has shared a couple of screenshots on its Twitter handle. As per the tipster, iQOO 7 will be launched in India in April. The tipster also confirmed that one more device will be launched which could be iQOO Neo5. The BIS screenshot reveals two model numbers - I2009 and the I2011 that could be of iQOO 7 and iQOO Neo5 respectively. iQOO Neo 5 Launch Confirmed for March 16, 2021; Likely To Feature Snapdragon 870 SoC.

The phone with model number I2009 was previously spotted on Geekbench in February with Snapdragon 888, 12GB of RAM and Android 11 operating system.

iQOO 7 will launch in April in India 🇮🇳got BIS certification.

One More device will launch in India having model no I2011 (iQOO Neo5 expected)@gagan_arora1 Can't Confirm but I can🤪 https://t.co/CjATsxS9d9 pic.twitter.com/58Wvr48DSh

On the other hand, the handset with model number I2011 has been spotted for the first time. A similar model number I2012 was spotted on Geekbench with specifications such as Snapdragon 870 SoC, 8GB RAM and Android 11 OS. Previously, it was speculated that the device could be an Indian variant of the iQOO Neo5.

Last year, smartphones with model number I1927 and I1928 were spotted and launched as the 4G and 5G variants of iQOO 3. Hence, there is a possibility that I2012 and I2011 model numbers could belong to the iQOO Neo5 phone. The company is also reportedly planning to launch iQOO Z3 and iQOO U3x in China by the end of this month.

(The above story first appeared on LatestLY on Mar 18, 2021 03:41 PM IST. For more news and updates on politics, world, sports, entertainment and lifestyle, log on to our website latestly.com).