Meipian is a popular graphic creation application, helping users to share graphic articles on WeChat and other social media. Compared with traditional work promotion methods, Meipian can display the work processing and the results achieved with more vividly and intuitively. 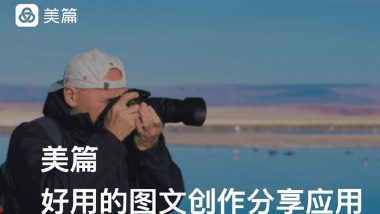 Meipian is a popular graphic creation application, helping users to share graphic articles on WeChat and other social media. Compared with traditional work promotion methods, Meipian can display the work processing and the results achieved with more vividly and intuitively.

Meipian was officially launched in July 2015, which has attracted more than tens of millions of users in China and has published tens of millions of articles and hundreds of millions of pictures. As a new type of graphic design software, Meipian is widely used in social media, and it has become a convenient tool for many people to exchange information.

With the rapid development of the Internet and 5G, short video creation has become more and more popular. Excepting the core business of creation of graphics and text, Meipian has also begun to actively deploy video capabilities to strengthen the core competitiveness of the platform and attract more Multiple creators.

The main feature of video creation is that users can create professional video content by replacing the pictures and music materials in the template, or using video shooting and recording with the post-production cropping, adding music, and filter functions. Those functions can apply in wide scenarios. In addition, Meicam's solutions can help Meipian to realize multi-platform interaction. It means that Meipian's photo album project which is edited in the mobile application (including special effects such as templates, music, subtitles, etc.) can be synchronized to the Meipian Mini program. These functions need professional audio-visual technology to realize.

Meicam Technology has been focusing on the technology development of the video and audio field for more than 20 years and has won more than 70 patented technologies. Meicam has always kept pace with the international level in technology and continuously applied the latest video technology to related fields.

Today, Meicam has collaborated with hundreds of customers at home and abroad, such as Xiaomi, OPPO, Vivo, ASUS, OnePlus, Lenovo, Bilibili, JD, Sina, and other leading customers in various fields, and with the traditional national grid, SMG, etc. in order to promote the use of integrated media in government and enterprises. In addition, Meicam Technology has also deployed in foreign markets, filling the gap of smart audiovisual solutions in overseas markets in the international arena. At present, it has provided in-depth technical services in the United States, South Korea, India, Singapore, and other countries and local Internet companies, radiating tens of millions of overseas users.