Motorola, the Lenovo owned smartphone maker will officially launch its Motorola Edge S device in the Chinese market. The company released the official poster of the upcoming phone on the Lenovo China website that reveals its processor and launch date.

Motorola, the Lenovo owned smartphone maker will officially launch its Motorola Edge S device in the Chinese market. The company released the official poster of the upcoming phone on Lenovo China website that reveals the processor and launch date. The smartphone will be launched on January 26, 2021 and powered by Qualcomm Snapdragon 870 chipset. Earlier today, Qualcomm announced its new Snapdragon 870 chipset and a report suggests that the press release revealed one of the manufacturers that signed up for the chipset is Motorola. Motorola Razr 5G Foldable Smartphone Launched in India at Rs 1.25 Lakh. 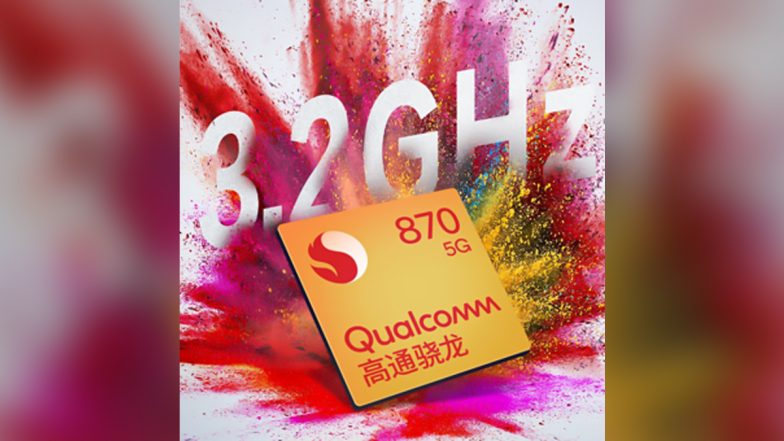 In terms of specifications, Motorola Edge S is likely to get a 6.7-inch FHD+ display and a 105Hz refresh rate. The device will be powered by the newly launched Qualcomm Snapdragon 870 chipset coupled with up to 12GB of RAM and multiple storage options. The smartphone could get a quad rear camera setup comprising of a 64MP main camera, a 16MP ultrawide angle lens, the other two lenses are unknown. At the front, there might be a dual-camera system with a 16MP shooter and an 8MP ultrawide angle snapper.

The phone is likely to be fuelled by a 5,000mAh battery and come with a side-mounted fingerprint scanner. The handset is expected to run on Android 11 based ZUI operating system. As of now, there is no information about the global launch of Motorola Edge S. Pricing and other details of Motorola will be revealed during its launch event. Last month, the company had also announced that it has planned to launch a new Moto G phone with Snapdragon 800 series chipset.

(The above story first appeared on LatestLY on Jan 20, 2021 11:36 AM IST. For more news and updates on politics, world, sports, entertainment and lifestyle, log on to our website latestly.com).