OnePlus Nord 2 With MediaTek Dimensity 1200 SoC Likely To Be Launched in Q2 2021: Report 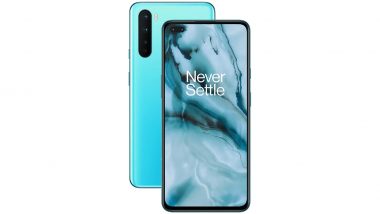 MediaTek launched its Dimensity 1200 chipset in January 2021 with a maximum clock speed of 3GHz. The chipset gets nine cores of ARM Mali-G77 MC9 GPU that supports up to 16GB of LPDDR4x RAM and UFS 3.1 storage. Realme, which is the sibling of OnePlus that is owned by BBK Electronics, was also rumoured to bring its new phone with the Dimensity 1200 chipset, but now, this model is likely to be introduced in the Realme X9 Series.

However, the company has not revealed any information about Nord's successor. With the launch of Nord 2 with MediaTek Dimensity 1200 SoC, it will be offered with 5G connectivity globally. OnePlus Nord is priced in India from Rs 24,999 for the base variant. So it would be interesting to watch in which price segment does the company places the upcoming Nord 2.

(The above story first appeared on LatestLY on Mar 04, 2021 06:01 PM IST. For more news and updates on politics, world, sports, entertainment and lifestyle, log on to our website latestly.com).