Oppo’s Upcoming Reno Series Might Be Called As Reno Glow; Applies for a New Trademark With EUIPO

The "Glow" could also be about a better display with a higher refresh rate panel on QHD displays with even higher maximum brightness. 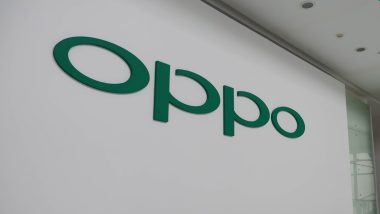 Beijing, April 27: Chinese smartphone maker OPPO has applied for a new trademark with the European Union Intellectual Property Office (EUIPO) for an upcoming Reno series smartphone, and it may be called the Reno Glow. According to GizmoChina, the Reno Glow could be related to a new camera system with better voice controls, although that is just speculation at this point. Netflix Adds HDR, HD Support to Oppo Reno3 Pro and Mi Note 10 Lite.

The "Glow" could also be about a better display with a higher refresh rate panel on QHD displays with even higher maximum brightness. Earlier, OPPO also patented a design for a foldable device that could also be used as a tablet. The patent was picked up by China Mobile and presents an exciting prospect for those awaiting the first truly foldable handsets. OPPO is said to be one of the manufacturers currently eyeing a foldable product, along with Samsung, LG and Apple.

(The above story first appeared on LatestLY on Apr 27, 2020 07:24 PM IST. For more news and updates on politics, world, sports, entertainment and lifestyle, log on to our website latestly.com).