Realme GT 2 Pro smartphone is said to debut in the Indian market on April 7, 2022. The company had teased the device on its official Twitter account, revealing its launch date and time. 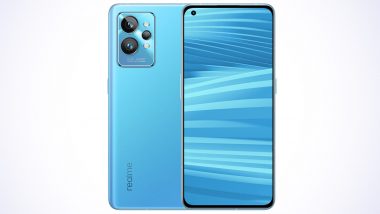 Realme GT 2 Pro smartphone is said to debut in the Indian market on April 7, 2022. The company had teased the device on its official Twitter account, revealing its launch date and time. However, the tweet has now been deleted due to unknown reasons. The tweet was first spotted by GSMArena and then shared online. The Realme GT 2 Pro launch event might take place on the above-mentioned date at 12:30 pm IST. Realme GT 2 Pro & Realme GT 2 With Triple Rear Cameras Launched Globally.

Realme GT 2 Pro has already been launched in the global and Chinese markets. The handset is likely to sport a 6.7-inch LTPO 2.0 AMOLED 10-bit Super Reality display with a resolution of 3216x1440 pixels. It might come powered by a Snapdragon 8 Gen 1 SoC paired with up to 12GB of RAM and 256GB of internal storage. The #realmeGT2Pro’s #PaperTechMasterDesign is our attempt to leap towards creating a sustainable future.

Let’s work for a greener world to inspire the generations of the future.#GreaterThanYouSee #LakmeFashionWeek pic.twitter.com/QgYMirJtOJ

For photography, the smartphone may come with a triple rear camera setup comprising a 50MP primary camera with a Sony IMX766 sensor, a 50MP ultra-wide-angle lens and a 2MP macro snapper. Upfront, there could be a 32MP selfie camera. Connectivity options might include 5G, Wi-Fi 6E, Bluetooth 5.0, GPS, NFC and a USB Type-C port. Realme GT 2 Pro is said to run on Android 12 based Realme 3.0 OS.

(The above story first appeared on LatestLY on Mar 23, 2022 05:06 PM IST. For more news and updates on politics, world, sports, entertainment and lifestyle, log on to our website latestly.com).