Republic Day is celebrated on January 26 every year, and today, India is celebrating its 73rd one. Google, the global tech giant, is also celebrating the big day with a special Doodle. 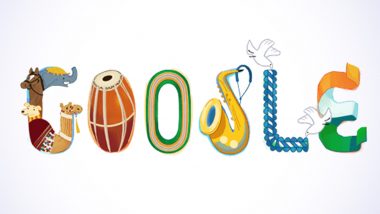 Republic Day is celebrated on January 26 every year, and today, India is celebrating its 73rd one. On this day, the Constitution of India came into effect in 1950. Google, the global tech giant, is also celebrating the big day with a special Doodle. Today's Google Doodle has Republic Day parade elements featuring animals such as an elephant, a camel, a dog, a horse. Google Reportedly Introduces Beta of Android Games to Windows PCs.

How many elements can you spot in it? pic.twitter.com/TTl8APa1uI

It also features the parade path, musical instruments like a Tabla, a saxophone and three colours of the Indian national flag. After clicking on the Google Doodle, it redirects to the 'India Republic Day' page, which shows the date January 26 and narrates about the history of the Republic Day.

The big day is celebrated with a grand parade in New Delhi's Rajpath, with 17 military bands, 25 tableaux of various states, armed forces and more. Due to rising cases of Omicron in the country, the government has advised people to watch the parade from their homes online.

(The above story first appeared on LatestLY on Jan 26, 2022 11:20 AM IST. For more news and updates on politics, world, sports, entertainment and lifestyle, log on to our website latestly.com).