Samsung To Supply Its 5G Network Solutions to Vodafone: Report

Samsung Electronics said on Monday it will supply its latest 5G network solutions to Vodafone, a London-based telecommunications giant, a move that will expand its presence in Europe. 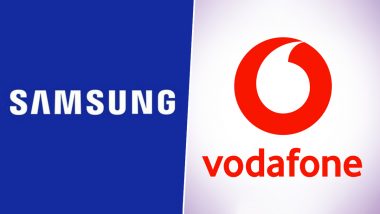 "This is a major step forward, as more operators are transitioning into new RAN technologies to prioritize user experience and efficiency," said Paul Kyungwhoon Cheun, head of networks business at Samsung.

Its fully-virtualised RAN is software-based that operates on commercial off-the-shelf (COTS) servers that can deliver equivalent performances to traditional hardware-based equipment, according to Samsung. Virtualized RAN and O-RAN are considered key technologies for the next-generation 5G services. Samsung has been trying to expand its presence in the network equipment market in recent years as industry leader Huawei has been slapped with U.S. sanctions over security reasons. Samsung has inked 5G equipment contracts in countries like Canada, New Zealand and Japan.

(The above story first appeared on LatestLY on Jun 15, 2021 08:48 AM IST. For more news and updates on politics, world, sports, entertainment and lifestyle, log on to our website latestly.com).