DNA Day 2022: Interesting Facts About DNA That Will Leave You Quite Surprised

DNA Day was officially marked as an annual day of celebration by The National Human Genome Research Institute after congress passed the concurrent resolution to give it an official title in 2003. It is celebrated annually in the United States on April 25. 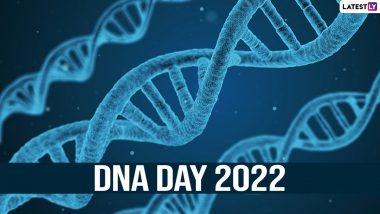 DNA Day is celebrated on the 25th of April in the United States to observe the completion of The Human Genome Project in 2003. The double helix shape of DNA was discovered in 1953. The goal of National DNA Day is to raise awareness and interest for teachers, students and the public to know more about DNA and also to celebrate the latest advance in genomic research.

DNA Day was officially marked as an annual day of celebration by The National Human Genome Research Institute after congress passed the concurrent resolution to give it an official title in 2003. DNA was introduced as a revolutionary concept and the information that we find only keeps advancing. Here are some interesting facts about DNA that will surprise you.

1. Humans and fruit flies share 60% of their genes, with 2/3 of those genes known to be involved in cancer.

2. Your DNA is long enough to stretch 600 times from the earth to the sun. Each of your cells' DNA strands would be 6 feet long if unwound and linked together.

3. Only 0.1 percent of the 3 billion base pairs in the human genome are unique to us, so every human being shares 99.9% of their DNA with everyone else.

5. Over 500 DNA codes have been lost in human evolution.

6. The genetic code in DNA is made up of only four components. Adenine (A), guanine (G), thymine (T), and cytosine (C) are the four nucleotides that makeup DNA (C).

DNA stands for deoxyribonucleic acid and is often referred to as the building block of life. The instructions for telling our bodies how to develop and function are stored in DNA. The nucleotide letters hold the DNA code, and the different letters represent different things. DNA research has developed over time and you can now find out about your Ancestory in detail by doing a DNA test.

(The above story first appeared on LatestLY on Apr 25, 2022 11:55 AM IST. For more news and updates on politics, world, sports, entertainment and lifestyle, log on to our website latestly.com).