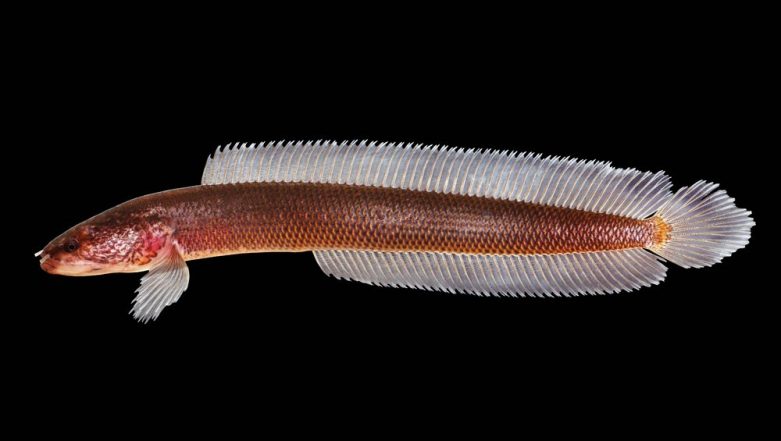 Scientists from India and the United Kingdom have discovered a new species of fish from Kerala. The snake-headed fish found in the paddy fields of Kerala has been named Gollum after J.R.R. Tolkien's fictional character from Lord of The Rings. The scientific name of the species is 'Aenigmachanna Gollum'. The fish is about 9.2 cms in length and caught the attention of scientists after a fish enthusiast named Mohammed Ajeer, posted its picture on Facebook. As described by the researchers it is the first snakehead fish that has been described as living underground. The findings have been published in the journal Zootaxa. Deep-Sea Snailfish That Melts on Surface Discovered by Scientists in Atacama Trench, Watch Video.

Snakeheads are actually native to Africa and Asia. Their specific feature is their long dorsal fins, large mouths and has a gill cavity which helps it to breathe. Rajeev Raghavan, Assistant Professor at Kochi’s Kerala University of Fisheries and Ocean Studies (KUFOS), a part of the research team was quoted to TNM and he said the fish was discovered in the paddy fields of Vengara in Malappuram. He mentioned it could be because of the massive floods that Kerala experienced in August last year. The team conducted research on two specimens they got from Mohammed Ajeer, who had uploaded the pictures on Facebook. Fish With Pigeon Head Found in China, Watch Video of The Weird Looking Mutant Species!

The Gollum snakehead (Aenigmachanna gollum) is a recently described species of subterranean fresh water fish from Kerala. If you come across anything similar, do record it on IBP. Photo by Anoop V. K. https://t.co/YnaQl6m5hP#fish #kerala #westernghats #biodiversity pic.twitter.com/7qdjJvcxgW

The researchers are also speculating a hidden ecosystem existing over 40 metres below the surface. Because the Gollum is the eighth subterranean fish that has been discovered from the aquifers beneath Kerala.