Moon Will Cover Mars Tonight! Know When and How to Watch Lunar Occultation 2020

This is a quite rare occurrence as it happens just twice a year. During this phenomenon, the Earth's satellite will pass in front of Mars, which will wink out its appearance for people here. The lunar occultation will be more prominently visible for people living in the North and Central America. 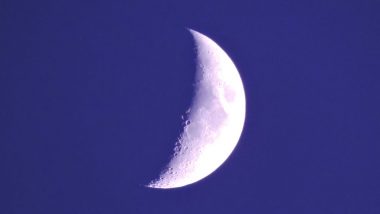 Love observing the stars, moon and all the celestial spectacles seen throughout the night? Then tonight is another interesting occurrence called the Moon-Mars occultation. It means, the moon will cover the red planet for a little while in the night sky. This is a quite rare occurrence as it happens just twice a year. During this phenomenon, the Earth's satellite will pass in front of Mars, which will wink out its appearance for people here. The lunar occultation will be more prominently visible for people living in the North and Central America. Ahead of this celestial event, we tell you more about the timings, how and when to see it. Moon to Pass Before Mars on February 18 Before Sunrise.

Occultation means when one object blocks the view of another for an observer. Tonight, the crescent moon will pass in front of the red planet, thus temporarily blocking its view for people on Earth. This is called as Moon- Mars occultation or a lunar occultation. As per reports in Sky and Telescope, the moon will move towards the left in direction of Mars when the occultation begins. At a point when they meet, it will take about 14 seconds for the moon to completely cover the red planet. Since Mars is a relatively visible planet, the process for moon to cover it is longer. When the occultation concludes, Mars will reappear from behind the dark, right edge of the lunar disk.

Parts of the US, Mexico and part of Central America will be able to see it clearly. So residents in North and Central America will be able to see it for about an hour.  East Coast of the United States or Canada, the event will occur after sunrise so it won't be easy to observe, unless you have great binoculars. The celestial event will not be visible for those in India or Asia. Moon Occult Mars Date and Timing: Places From Where Lunar Occultation Will be Visible on 18th February, 2020.

For those staying in the Pacific Time zone, the entire occultation will occur during the predawn hours on February 18. For those in the Mountain Time zone, the occultation begins in a predawn sky and ends in a predawn or dawn sky. In Central Time Zone, it starts in dawn sky and then ends at dawn or after sunrise. The International Occultation Timing Association has listed down all the timings and regions from where the occultation can be seen from. To see this celestial event, a clear sky is important. Additionally, you must have a good pair of binoculars or even a telescope to observe the sky.

(The above story first appeared on LatestLY on Feb 18, 2020 05:10 PM IST. For more news and updates on politics, world, sports, entertainment and lifestyle, log on to our website latestly.com).