Pfizer and Moderna vaccines, the first two jabs authorised for emergency use against COVID-19 by the US Food and Drug Administration (FDA), produce immune responses that are both strong and potentially long-lasting, finds a study. 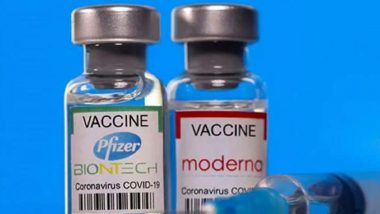 New York, June 29: Pfizer and Moderna vaccines, the first two jabs authorised for emergency use against COVID-19 by the US Food and Drug Administration (FDA), produce immune responses that are both strong and potentially long-lasting, finds a study.

While both vaccines performed well in clinical trials, and have been widely credited with reducing disease, concerns remained over how long immunity induced by the mRNA-based shots will last.    Prior COVID-19 Infection Won’t Affect IVF Success: Study

The study, led by researchers from the Washington University School of Medicine in St Louis showed that nearly four months after the first dose people who received the Pfizer vaccine still had so-called germinal centers in their lymph nodes churning out immune cells directed against SARS-CoV-2, the virus that causes COVID-19.

The team found that even three weeks after the first dose, all 14 participants had formed germinal centers with B cells producing antibodies that target a key SARS-CoV-2 protein. The response expanded greatly after the booster shot and then stayed high.

Even 15 weeks after the first dose, eight of 10 people still had detectable germinal centers containing B cells targeting the virus.

"Germinal centers are the key to a persistent, protective immune response," said Ali Ellebedy, Associate Professor of pathology and immunology, of medicine and of molecular microbiology.

"Germinal centers are where our immune memories are formed. And the longer we have a germinal center, the stronger and more durable our immunity will be because there's a fierce selection process happening there, and only the best immune cells survive," Ellebedy added.

Moreover, vaccination led to high levels of neutralising antibodies effective against three variants of the virus, including the Beta variant from South Africa that has shown some resistance to vaccines.

Vaccination also induced stronger antibody responses in people who had recovered from SARS-CoV-2 infection compared to those who had never been infected. Among people without prior exposure to the virus, antibody levels rose slowly after the first dose and peaked one week after the second.

Both Pfizer and Moderna vaccines were created with mRNA technology. Unlike most vaccines, which provide bits of viral or bacterial proteins to trigger an immune response, mRNA-based vaccines provide instructions for the body to build and release foreign proteins, such as the spike protein in the case of the SARS-CoV-2 virus.

(The above story first appeared on LatestLY on Jun 29, 2021 04:29 PM IST. For more news and updates on politics, world, sports, entertainment and lifestyle, log on to our website latestly.com).