What Is Echidna? Scientists Say They Have Finally Uncovered The Mystery Behind The 4-Headed Penis of These Bizarre Mammals (Watch Video) 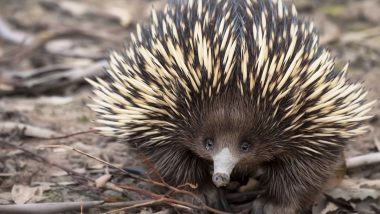 With spines like a porcupine, a pouch akin to a kangaroo, a beak that resembles a bird, and the ability to lay eggs like scores of other animals, the Echnidas are a weird, albeit adorable looking mammal that walks the grounds of Australia. Also known as Spinyanteaters, these unique mammals belong to monotremes — the smallest of the three mammal groups. While it is widely known that these animals measure usually between 12 and 17 inches long and weigh between 4 and 10 pounds and the  Male echidnas have a bizarre, four-headed penis, a lot about these particular species has remained a mystery, until now. Lately, scientists have uncovered the mystery behind the four-headed penis by creating an advanced 3D model of the particular organ.

Until now scientists were aware that during sex, two of the penis heads shut down while the other two grew bigger for mating purposes. And these penises was only used for sexual encounters. They used another organ for urinating and defecating purposes known as the cloaca. The Males also usually alternate the penis heads used between matings.

The echidna sperm are also said to be unique in the way it works. Jane Fenelon, the lead author of the study and a reproductive biologist at the University of Melbourne, told Live Science, "Ejaculated semen samples contained bundles of up to 100 sperm that are joined at the tip of their heads so they form a sphere-like shape. These bundles have been observed to swim progressively forward in a vigorous and coordinated pattern, and bigger bundles seem to swim better than individual sperm or smaller bundles." However, the science behind the unusual mating method, where echidnas use two penis heads was unknown. Now they might have finally found an explanation.

To better understand how the organ worked, Jane Fenelon used a short-beaked echidna for research at a wildlife sanctuary in Australia. They created 3D models of the penises that revealed that the urethral tube - through which the sperm moves - splits the heads into two separate tubes. This split causes the sperm to move to each of the four heads. Further probing revealed that echidnas have a particular type of tissue that enable them to perform their unusual mating ritual.

"Initially, we thought we'd find some sort of valve mechanism," The researcher told Live Science. They expected the valve to control the two-sided action of the echidna penis. However, instead of a valve, the researchers uncovered a tissue inside the penis that might be responsible for the whole zany shenanigans.

According to the researcher, Mammalian penises consists of two types of erectile tissue — the corpus cavernosum which provides rigidity to the penis and the corpus spongiosum which allows sperm to pass through. The researchers told the website, while in most mammals, the two corpus spongiosum structures merge into one and corpus cavernosum remains separated, it was the opposite for the short-beaked echidna; Cavernosum merged in these particular mammals and the spongiosum diverged. This seperation apparently is the cause behind "echidnas to erect each half, or pair of heads, independently from the other," the researchers said.

(The above story first appeared on LatestLY on Jun 15, 2021 04:00 PM IST. For more news and updates on politics, world, sports, entertainment and lifestyle, log on to our website latestly.com).