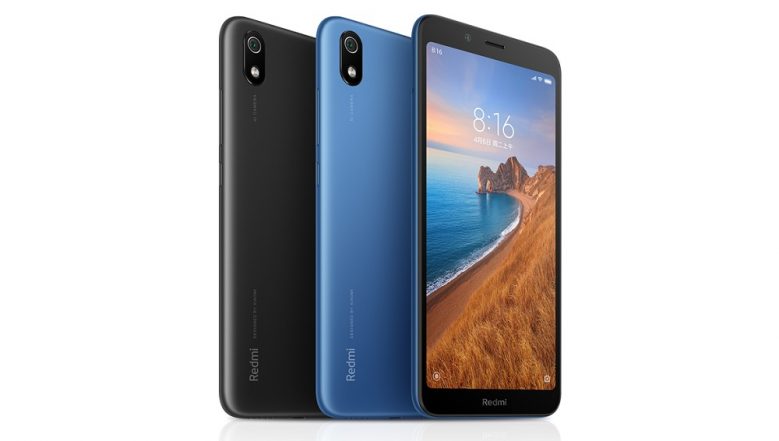 Xiaomi India will be launching another new smartphone today for the domestic market. Strengthening its product portfolio, the Chinese phone maker will be unveiling the new Redmi 7A device at an event. Dubbed as 'Smart Desk Ka Smartphone', the new Redmi 7A will be introduced as a successor to Redmi 6A and it will be the second entry-level smartphone after Redmi Go. When launched, the smartphone will be made available for online sale via Flipkart & official website - Mi.com. The launch event is scheduled to commence at 12PM IST onwards. The smartphone maker will be streaming the event straight from the event via official YouTube channel. Xiaomi Redmi 7A Smartphone India Launch Confirmed For July 4, 2019: Report.

On the specification front, the new Redmi 7A will be pack a 5.45-inch IPS LCD display with an 18:9 aspect ratio and resolution of 720×1440p. The smartphone will be powered by an octa-core chipet from Qualcomm - Snapdragon 439, which will be clocked at 1.95GHz. The phone maker is expected to launch the smartphone in three versions - 2GB/16GB, 2GB/32GB & 3GB/32GB.

Coming to optics, the smartphone will sport a single 13MP sensor at the rear with an LED flash. The company will also be including AI features, PDAF fast focus, AI beauty and AI background blur to the module. At the front, there will be a 5MP camera for video calling and selfies. The handset will be backed by a large 4,000mAh battery with 10W standard charging. For connectivity, the phone will get dual-SIM support, 4G VoLTE, Wi-Fi, Bluetooth 4.2, GPS, a Micro-USB port and a 3.5mm headphone jack. The smartphone will run on the latest Android Pie OS based on MIUI 10 OS.

As far as the prices are concerned, the company will be revealing them at the launch event itself. However, we speculate that the India prices for the Redmi 7A will be in-line with the Chinese version of the smartphone. The base variant of Redmi 7A retails at RMB 549 (approximately Rs 5,500) for the China model. However, the bigger model with 2GB RAM and 32GB internal storage costs RMB 599 (around Rs 6,000). The Redmi 7A is likely to be priced in India from Rs 5,999.