Xiaomi Stock Down 10% After US Blacklists Smartphone Maker

After Huawei and ZTE, the US government has now taken on the Chinese conglomerate Xiaomi, blacklisting it as a "Communist Chinese military company". Xiaomis stock nosedived more than 10 per cent in early Friday trading after the news broke. 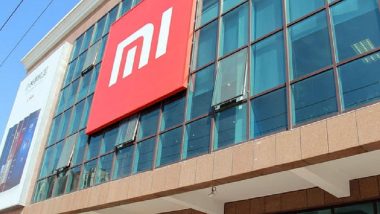 San Francisco, Jan 15: After Huawei and ZTE, the US government has now taken on the Chinese conglomerate Xiaomi, blacklisting it as a "Communist Chinese military company". Xiaomis stock nosedived more than 10 per cent in early Friday trading after the news broke.

In a fresh list, the US Department of Defense has targeted Xiaomi, which means that the company is also vulnerable to the outgoing President Donald Trump's executive order that bans the US firms from investing in such companies. Huawei Will Invest in Chip Arm Hisilicon Despite US Ban: CEO Guo Ping.

The move may force US companies and other investors to divest in Xiaomi this year.

According to Counterpoint Research, Xiaomi was the third largest smartphone maker globally in the third quarter of 2020, and India is its biggest market.

"The Department is determined to highlight and counter the People's Republic of China's (PRC) Military-Civil Fusion development strategy, which supports the modernisation goals of the People's Liberation Army (PLA) by ensuring its access to advanced technologies and expertise acquired and developed by even those PRC companies, universities, and research programmes that appear to be civilian entities," the Department said in a statement late Thursday.

The Department released its initial list of companies to Congress in June 2020 and has now included Xiaomi.

Xiaomi, which for the first time surpassed Apple to capture the third spot in the global smartphone market in Q3 2020, was yet to react to the US move.

Most of the other companies on the list are more industrially oriented, specialising in aviation, aerospace, shipbuilding, chemicals, telecommunications, construction, and other forms of infrastructure.

"Both companies have close ties to the Chinese Communist Party and China's military apparatus, and both companies are broadly subject to Chinese law obligating them to cooperate with the country's intelligence services.

"The Bureau also took into account the findings and actions of Congress, the Executive Branch, the intelligence community, our allies, and communications service providers in other countries," the FCC said.

(The above story first appeared on LatestLY on Jan 15, 2021 11:00 AM IST. For more news and updates on politics, world, sports, entertainment and lifestyle, log on to our website latestly.com).