The Department of Conservation said it was notified of about 80 to 90 pilot whales stranded at Hanson Bay, near Owenga, on Thursday evening. 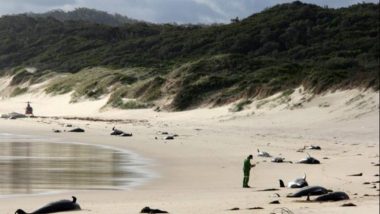 Wellington, November 30: Fifty-one whales have died after becoming stranded on a beach on the Chatham Island off New Zealand. The Department of Conservation said it was notified of about 80 to 90 pilot whales stranded at Hanson Bay, near Owenga, on Thursday evening, stuff.co.nz reported.

About 30 to 40 whales refloated themselves and returned to sea while 50 whales were found dead and one had to be put down. Nigel Ryan, who lives near the site where the whales were stranded, said the incident happened about 4.30 p.m. on Thursday. "You feel helpless because there's nothing you can do. There was quite a lot of blood in the water." 145 Whales Found Dead on Steward Island in New Zealand; What is Whale Stranding? (Watch Video).

The deaths came less than a week after 145 pilot whales were found dead on a remote beach in New Zealand's Stewart Island. Ten pygmy killer whales were also stranded on 90 Mile Beach in Northland on Sunday.

The reason why whales and dolphins strand is not fully known but factors can include sickness, navigational error, geographical features, a rapidly falling tide, being chased by a predator or extreme weather.

(The above story first appeared on LatestLY on Nov 30, 2018 02:47 PM IST. For more news and updates on politics, world, sports, entertainment and lifestyle, log on to our website latestly.com).