Conservation officers found that half of the whales decided not to return to the waters as their condition was terrible. 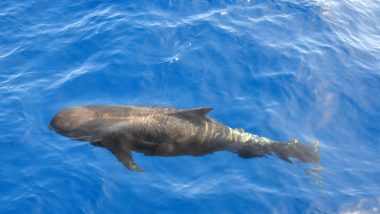 In yet another incident of whale stranding, 145 pilot whales were found dead on Steward Island in New Zealand. The stranded whales were initially found by a hiker who informed the concerned authorities. Conservation officers found that half of the whales decided not to return to the waters as their condition was terrible. In one of the worst cases in history, 250 pilot whales died last year on the beach. They died after rescuers tied to refloat them.

Department of Conservation (DOC)'s Rakiura Operations Manager Ren Leppens said, "It's always a heart-breaking decision to make." As per reports, of the stranded whales, about 75 of them were already dead. Conservation workers decided to euthanise the rest due to their poor condition.  Leppens said that the whales would have been there for a day as they were half buried in sand suggesting their ill health. 145 Pilot Whales Die in Stranding on Stewart Island in New Zealand.

Only 375 people live on Stewart Island. The whales were found at Mason's Bay about which is 35 kilometres from the main township of Oban. Whale strandings have become quite common in New Zealand during the Southern Hemisphere spring and summer. 6000 Endangered Fish Dies in China Due to Construction of Bridge; Work Halted.

What is Whale stranding?

Cetacean stranding or stranding is also known as beaching when whales or dolphins strand themselves on land, generally on the beach. Whale stranding is mostly due to dehydration, drowning in high tide due to their own weight or various other phenomena. In the recent past, there has been an increase in the number of whale beaching incidents.

The DOC stated that they handle at least 85 incidents of strandings every year. They are generally caused by sickness, navigational error or a chasing predator, amongst other reasons. Last year, New Zealand witnessed the largest incident of whale strandings as 300 whales died on a beach in South Island. On Sunday, 10 pygmy killer whales were stranded at Ninety Mile Beach on the North Island. After two whales died, the staff plan to refloat the remaining eight.

(The above story first appeared on LatestLY on Nov 26, 2018 05:47 PM IST. For more news and updates on politics, world, sports, entertainment and lifestyle, log on to our website latestly.com).