Airbnb to Restrict People Under 25 Years in UK, France And Spain From Renting Entire Homes To Reduce Rowdy Parties And Ensure Safety Amid COVID-19 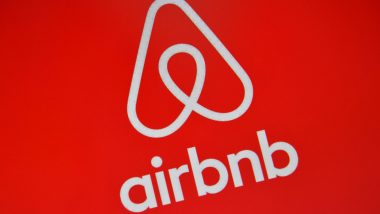 UK, August 14: Airbnb on Friday announced that it is restricting the ability of people under 25 in Britain, France and Spain from renting entire homes via its platform. According to an AFP report, the objective behind the decision is to reduce unauthorised parties and ensure safety.

The company started cracking down last year as they started receiving complaints that rowdy parties were causing problems to the neighbours in certain areas. Now amid the coronavirus outbreak, there is a greater concern that social distancing norms are flouted.  The company, therefore, announced that it will now start in Britain, France and Spain a ban on under-25s with less than three positive ratings from renting entire homes close to where they live. Airbnb to Lay Off Nearly 1,900 Staff in Effort to Ride Out Coronavirus Pandemic.

According to a PTI report, for the first time, Airbnb will also take legal action against a guest for violating its ban on unauthorised parties. The company on Wednesday announced that it is initiating legal proceedings against a guest who held an unauthorized party at a home in Sacramento County, California, where three people were shot and wounded.

(The above story first appeared on LatestLY on Aug 14, 2020 08:42 AM IST. For more news and updates on politics, world, sports, entertainment and lifestyle, log on to our website latestly.com).