Donald Trump will join PM Narendra Modi at 'Howdy, Modi!' event in Houston and address Indian diaspora on September 22, the White House confirmed on Monday. However, it remains unclear when and where President Trump will meet Imran Khan. 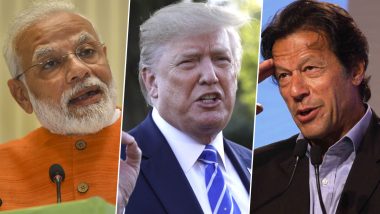 "I'll see Prime Minister Modi and I will - we'll - be meeting with (prime ministers of) India and Pakistan," President Trump told reporters in response to a question at the White House on Tuesday. He also maintained that tension between India and Pakistan had reduced. "I think a lot of progress is being made there," he said. President Trump may meet Imran Khan on the sidelines of the UN General Assembly Session in New York later this month.

After attending the 'Howdy, Modi!' event where more than 50,000 Indian-Americans are expected to arrive, will travel to Ohio and then is expected to fly to New York to attend the Annual General Assembly Sessions of the United Nations. According to PM Modi's schedule, he will have two engagements in Houston — addressing the NRI community at a stadium and a roundtable meeting with CEOs and top executives of US energy companies. Narendra Modi Visit to US: Bilateral Talks With Donald Trump, Energy Deals, UNGA Address on Top Agenda.

On Monday, PM Modi tweeted saying that the special gesture shown by President Trump of offering to join the 'Howdy Modi' event highlights the strength of the relationship between India and the US.

Tensions between India and Pakistan once again soared after the Modi government scrapped the special status of Jammu and Kashmir under Article 370. Pakistan has alleged large-scale human rights violations and violence in Jammu and Kashmir. The Indian government and the Kashmir administration, however, have stoutly denied Pakistan's allegations.

(The above story first appeared on LatestLY on Sep 17, 2019 08:33 AM IST. For more news and updates on politics, world, sports, entertainment and lifestyle, log on to our website latestly.com).