Bah Ndaw Appointed as Interim President of Mali Month After Military Coup; Know All About Former Defence Minister of The African Country 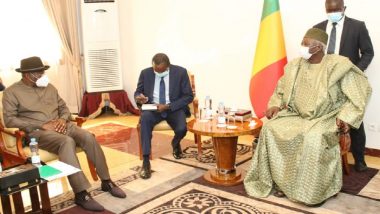 Bamako, September 25: Retired Colonel and former defence minister Bah Ndaw was sworn in as Mali's interim president on Friday during a ceremony held in the capital, Bamako. Bah Ndaw has been tasked with presiding over an 18-month transition back to civilian rule. The retired Colonel was appointed as interim president almost a month after a military coup. On September 21, 2020, he was named president by a group of 17 electors. Mali Crisis: Here's What Happened Before President Ibrahim Boubacar Keita Announced His Resignation And Dissolved the Parliament.

Junta leader Colonel Assimi Goita was also sworn in as the vice president of the transition period. Ndaw appointment could lead to the lifting of economic sanctions imposed by Mali's neighbouring countries after the military coup. The swearing-in ceremony was attended by former Nigerian President Goodluck Jonathan. Mali President Ibrahim Boubacar Keita Resigns Hours After Being Detained by Mutiny Troops.

Who is Bah Ndaw?

After retirement, he succeeded Soumeylou Boubeye Maiga as Minister of Defense under President Ibrahim Boubacar Keïta. During his time in office he signed a defence agreement with France. He also worked on a reorganization of the Malian Armed Forces. Ndaw resigned from the post as he disagreed with some conditions regarding the integration of deserting former combatants stipulated for the Treaty of Algiers.

Last month, Mali President Ibrahim Boubacar Keita announced his resignation. Keita resigned from the post hours after being detained by mutinying soldiers. In an address on state television, the 75-year-old said he was resigning to avoid "bloodshed". Keita won a second term in elections in 2018, but there was anger over corruption, the mismanagement of the economy and the rise of communal violence in several areas of the country.

(The above story first appeared on LatestLY on Sep 25, 2020 06:41 PM IST. For more news and updates on politics, world, sports, entertainment and lifestyle, log on to our website latestly.com).