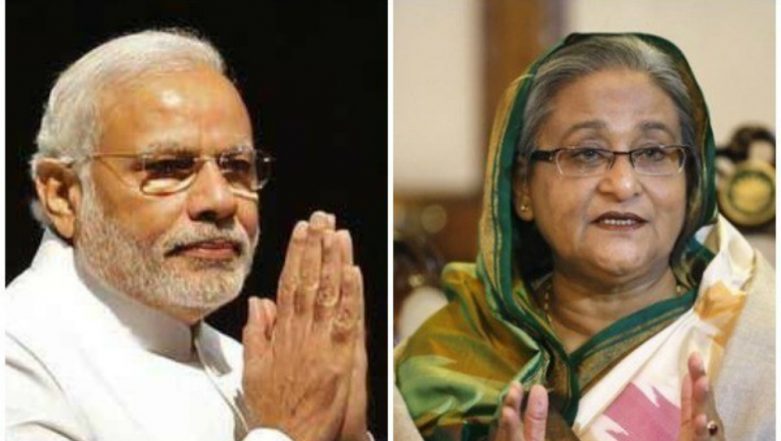 New Delhi, January 24: Bangladesh Prime Minister Sheikh Hasina extended wishes to Prime Minister Narendra Modi on the occasion of  Republic Day of India. A press statement released by the Bangladesh High Commission in New Delhi on Thursday quoted Hasina as saying, “Bangladesh and India enjoy excellent bilateral relations not only as closest neighbours but also through sharing a common aspiration for achieving mutual benefits for the people of both countries.”

“Common historic, cultural and civilisation roots have resulted in deepening engagements between Bangladesh and India over the years, taking forward our countries towards greater prosperity and development,” she said. Best Republic Day Songs 2019: List of Most Patriotic Songs for 26th January Celebrations and School Dance Performances.

Shiekh Hasina-led Awami League-led Grand Alliance swept the 11th Parliamentary polls in the country, on December 30 last year, securing 288 seats out of the 300 seats, while the opposition, including the Jatiya Oikya Front suffered a massive rout, winning only seven seats, in the polls marred by violence and allegations of rigging. Republic Day 2019: Try These Indian Nail Art Designs This 26th January That Are Beyond Creative (View Pics).

Prime Minister Modi congratulated Hasina for securing a victory in the polls, asserting that India will continue to assist its neighbouring country in its development process like earlier before.

“The Indian premier called Prime Minister Sheikh Hasina at about 10:30am and congratulated her, the Awami League and the people of Bangladesh on securing her party’s absolute majority in the national elections held on Sunday,” Hasina's Press Secretary Ihsanul Karim was quoted as saying to the Daily Star, a Dhaka-based news newspaper.

“The victory of the Awami League in the polls is a reflection of stunning development that Bangladesh attained under your dynamic leadership,” Modi said.