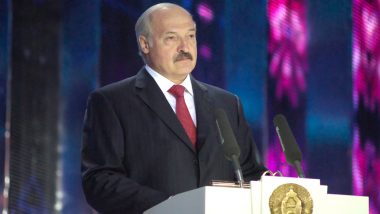 Minsk, August 15: Belarus' embattled leader Alexander Lukashenko sought the intervention of Russian counterpart Vladimir Putin, warning that the protests underway in his nation has the potential of spilling over across Eurasia. In order to keep regional stability intact, coordinated action is required, he told the state-owned media on Saturday.

Lukashenko said he needs to reach out to the Russian President at the earliest, suggesting that the agitation may spill out of hands if left unchecked at the geopolitical level. Sviatlana Tsikhanouskaya, Opposition Leader and Main Rival of President Alexander Lukashenko, Flees to Lithuania.

“There is a need to contact Putin so that I can talk to him now, because it is not a threat to just Belarus anymore," he was quoted as saying by state news agency Belta.

The President further added that there is lack of comprehensive understanding among the laymen in Belarus about the threat which the protests pose.

“Defending Belarus today is no less than defending our entire space, the union state, and an example to others … Those who roam the streets, most of them do not understand this," he was further reported as saying.

Over 3,000 protesters were detained in Belarus over the past five days. The nation has remained under chaos following the declaration of results on Sunday.

Despite widespread support for Lukashenko's challenger Svetlana Tikhanovskaya, the results showed 80.9 percent voted in favour of the incumbent President. Following the alleged rigged poll results, a stream of protesters were on the street in Minsk.

In the brutal police crackdown, two are confirmed to be officially killed. According to UN Special Rapporteur on the situation of human rights in Belarus Anais Marin, the death toll could be "way higher" and is being concealed by the authorities.

(The above story first appeared on LatestLY on Aug 15, 2020 03:58 PM IST. For more news and updates on politics, world, sports, entertainment and lifestyle, log on to our website latestly.com).