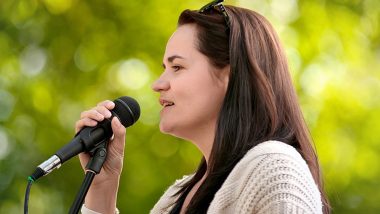 Vilnius, August 11: Sviatlana Tsikhanouskaya, Belarusian opposition leader and the main rival of current president at the Belarus elections 2020, left for Lithuania amid the bloody protests against the contested reelection of Alexander Lukashenko. This development was confirmed by Foreign Minister of Lithuania Linas Linkevicius on Tuesday. Belarus: Anger Erupts over President's Election to 6th Term.

Linkevicius on Tuesday morning tweeted that the former English teacher had arrived in his country and is away from harm. “Sviatlana Tsikhanouskaya is safe. She is in Lithuania,” he wrote. Belarus Election 2020: Germany Voices 'Strong Doubts' After Results Show Landslide Win for President Alexander Lukashenko.

Svetlana #Tikhanovskaya is safe. She is in #Lithuania. pic.twitter.com/6f9U2meoX0

This comes hours after Tsikhanouskaya went to the Electoral Commission (EC) in Belarus demanding a recount of the presidential election, rejecting results that show Lukashenko secured a landslide.

Tsikhanouskaya told EC that she had heard of an absolutely opposite result of Sunday's presidential election. "We are gathering proof of falsifications. We have people who are officially ready to confirm falsifications at poll stations. So we are starting to actively work on this and right now I'm going to the Central Election Commission to say that we don't accept the result of the elections," she had said

(The above story first appeared on LatestLY on Aug 11, 2020 03:03 PM IST. For more news and updates on politics, world, sports, entertainment and lifestyle, log on to our website latestly.com).