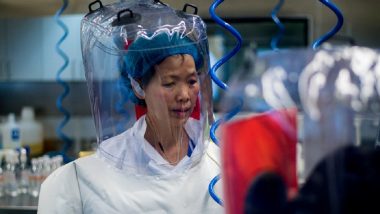 Beijing, May 26: The Wuhan Institute of Virology is at the centre of all conspiracy theories alleging coronavirus to be a "man-made" pandemic. The biosafety lab, based in Wuhan - the ground zero of COVID-19 outbreak - is being constantly referred to by US President Donald Trump in his tirade against China. The deputy director of the lab, also referred to as China's "Bat Woman", has categorically rejected the charge. US, China at 'Brink of New Cold War', Says Chinese Foreign Minister Wang Yi.

Zhengli claimed that the latest coronavirus is only the "tip of iceberg" and more such viruses could be unleashed against humans by the nature. To avoid similar pandemics in the future, the world requires enhanced study and coordinated response.

“If we want to prevent human beings from suffering from the next infectious disease outbreak, we must go in advance to learn of these unknown viruses carried by wild animals in nature and give early warnings," she told CGTN. Zhengli further added that it was unfortunate that world leaders are "politicising" the health crisis.

Zhengli earned the tag of China's bat woman for her dedicated research on the mammals carrying SARS-like virus from 2004 onwards. Since the outbreak of coronavirus, she has kept a low-profile and spoke on the crisis only twice. Before her CGTN interview, she spoke on the pandemic only once on social media.

While reacting to reports which linked the Wuhan lab to the outbreak of coronavirus, Zhengli had wrote on Weibo that she "swears on her life" that COVID-19 has nothing to do with her lab. She had also refuted reports about her planned defection from China ahead of the virus outbreak.

Conspiracy rumours that the biosafety lab was involved in the outbreak swirled online for months before Trump and US Secretary of State Mike Pompeo brought the theory into the mainstream by claiming that there is evidence the pathogen came from the institute. The United States and Australia have called in recent weeks for an investigation into the origins of the pandemic.

(The above story first appeared on LatestLY on May 26, 2020 07:37 PM IST. For more news and updates on politics, world, sports, entertainment and lifestyle, log on to our website latestly.com).