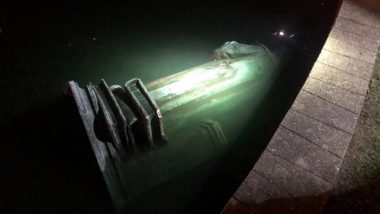 Richmond, June 10: The Black Lives Matter (BLM) protests, which is gradually witnessing the rise of "tear it down" chants amidst its processions, pulled down the statue of yet another colonian icon. Their target, this time, was the statue of Christopher Columbus located in Richmond city of Virginia. The sculpture was also burnt by them and thrown into lake. Statue of Edward Colston, 17th Century Slave Trader, Pulled Down and Thrown Into Bristol Harbour by Black Lives Matter Protesters in UK (Watch Video).

The incident was reported late on Tuesday, when a group of demonstrators marched to the Byrd Park and pulled down the Columbus statue that was installed for last several decades. One of the protesters, while speaking to a news channel, said the decision to bring down the statue was instant and not pre-planned.

Reports, however, claimed that several protesters were heard chanting "tear it down" during the protest march. Once the statue was brought to the ground, the protesters trampled upon it, poured kerosene and partially burnt it. The statue was then kicked and rolled towards the nearby Fountain Lake, and dumped into it.

A statue of Christopher Columbus has been removed by protesters in Virginia and dragged into a lake. #BlackLivesMatter pic.twitter.com/NrCLeSs3sC

Columbus, a 15th century ocean explorer, is credited for Europe's discovery of Latin American, Central America and Caribbean Islands. The Italy-born explorer's role has, however, come under ire of contemporary historians for his brutal subjugation of native populations and "enslaving" them.

On June 6, the BLM protesters pulled down the statue of  General Williams Carter Wickham in Monroe Park. The bringing down of statue was also stated to be a spontaneous act by the demonstrators who had gathered to demand racial justice in the aftermath of George Floyd's police killing.

In the UK, a similar act was reported by the BLM protesters as they pulled down the statue of Edward Colston, a 17th century slave trader, in Bristol city. The statue was similarly dumped into the Avon river.

(The above story first appeared on LatestLY on Jun 10, 2020 09:20 AM IST. For more news and updates on politics, world, sports, entertainment and lifestyle, log on to our website latestly.com).