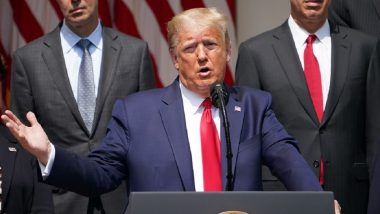 Washington, September 17: With just months left for the United States Presidential elections, a former model had accused US President Donald Trump of sexually assaulting her at the US Open tennis championship 23 years ago. The 48-year-old Amy Dorris had stated that she felt 'sick' and 'violated', following an alleged assault in Trump's VIP box at the tournament in New York on September 5, 1997. However, Trump had denied the allegations.

According to a report, published in the Guardian, Dorris had alleged the Donald Trump forced his tongue down her throat. She also alleged that Trump held her in a 'tentacle'-like grip that she could not escape from. Oracle-TikTok Deal: US President Donald Trump Says Looking Into The Deal to Ensure No Compromise on National Security.

Dorris alleged, as quoted by the international daily, "He just shoved his tongue down my throat and I was pushing him off. And then that's when his grip became tighter and his hands were very gropey and all over my butt, my breasts, my back, everything."

Adding more, she said, "I was in his grip, and I couldn't get out of it. I don't know what you call that when you're sticking your tongue just down someone's throat. But I pushed it out with my teeth. I was pushing it. And I think I might have hurt his tongue."

Meanwhile, Trump's lawyers have denied Dorris's allegations 'in the strongest possible terms'. They had said that Trump never harassed, abused or behaved improperly towards Dorris. Also, Dorris's ex-boyfriend Jason Binn state that he has no memory of her making any such claims at the time.

(The above story first appeared on LatestLY on Sep 17, 2020 07:02 PM IST. For more news and updates on politics, world, sports, entertainment and lifestyle, log on to our website latestly.com).