United States President Donald Trump will sign a proclamation to deploy the U.S. National Guards at the U.S.-Mexican border to stop the flow of illegal immigrants. 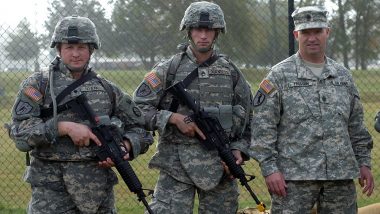 United States President Donald Trump will sign a proclamation to deploy the U.S. National Guards at the U.S.-Mexican border to block the movement of the illegal immigrants into the country via the Mexican border.

As per a media report, U.S. Homeland Secretary Kirstjen Nielsen said in a statement that President Trump has directed the Department of Defense and the Department of Homeland Security to work together with the governors to deploy the national guard to the southwest border. "The threat is real," Homeland Security Secretary Kirstjen Nielsen told reporters at a White House news conference. "We continue to see unacceptable levels of illegal drugs, dangerous gang activity, transnational criminal organisations and illegal immigration flow across our border," she said.

The troops could be deployed at the U.S.-Mexican border at the intervening night of April 4 and April 5 in conjunction with the state governors. "This threatens not only the safety of American communities and children but also the very rule of law, on which, the country was founded. It's time to act. So let's talk a little bit about that today," she said.

This comes after President Trump's statement at the Baltic summit on Tuesday where he claimed to prepare U.S. military forces to guard the (U.S.-Mexico) borders after consulting Former Major General of US Army (Ret.) General David Morris. "In an effort to prevent such a consequence, the president has directed that the Department of Defence and the Department of Homeland Security work together with our governors to deploy the National Guard to our southwest border to assist the Border Patrol," Nielsen said.

Further details regarding the number of military troops deployed, their positions, the financing of the troops and the total duration of military deployment at the borders have not been disclosed.

In the last 15 months, she said, the Trump administration has taken major steps to methodically strengthen border security. "We stepped up the targeting of dangerous criminal gangs such as MS-13, we removed thousands more criminal aliens than the year prior, we no longer exempt entire classes of illegal aliens from the consequences of breaking our immigration laws," she said.

Ruing that the system rewards bad behaviour, Homeland Security Secretary Kirstjen Nielsen said it does not punish lawbreakers. "It undermines our nation's economic interests. Make no mistake, interdiction without the ability to promptly remove those without legitimate cause is not border security, it is not national security," she asserted.

Nielsen also said that the Congress has failed to act. "Worse still, some members of Congress have continually opposed efforts to secure the border. As a result of this continued congressional inaction, the administration has drafted legislation, and we will be asking Congress again to provide the legal authority and resources to address this crisis at our borders," she added.

"We will not allow illegal immigration levels to become the norm. More than 1,000 people a day, 300,000 a year, violating our sovereignty as a nation will never be acceptable to this president," Nielsen said.

Asking the Congress to pass the necessary legislation to fund a wall for the U.S.’s border with Mexico, Nielsen said in the meantime, Trump has directed that National Guard personnel be deployed to the southern border.

(The above story first appeared on LatestLY on Apr 05, 2018 09:19 AM IST. For more news and updates on politics, world, sports, entertainment and lifestyle, log on to our website latestly.com).