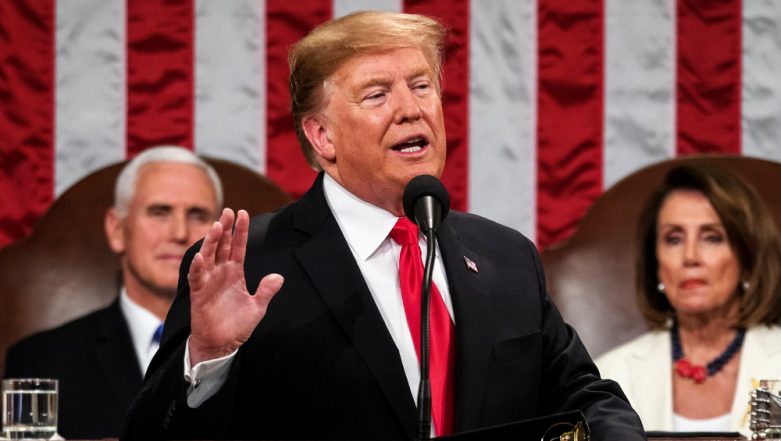 Washington, June 28: President Donald Trump took on Twitter's version of a penalty shootout Wednesday in a row with the USA women's World Cup soccer stars over visiting the White House. USA co-captain Megan Rapinoe kicked off by issuing an expletive-reinforced thanks-but-no-thanks before Trump had even issued an invite. "I'm not going to the fucking White House," Rapinoe exclaimed in a video clip of an interview with Eight by Eight, a football magazine. "No. I'm not going to the White House." The comment, lasting a few seconds, went viral. Rapinoe is not just any footballer, but a pillar of the reigning women's world champion team, which faces hosts France in the quarter finals on Friday.

Instantly recognizable with her dyed, short hair, Rapinoe is also one of the highest-profile openly lesbian celebrities and no stranger to expressing her opinions. Then again, Trump is not just any president. "Megan should never disrespect our Country, the White House, or our Flag, especially since so much has been done for her & the team. Be proud of the Flag that you wear," he shot back on Twitter.

Women’s soccer player, @mPinoe, just stated that she is “not going to the F...ing White House if we win.” Other than the NBA, which now refuses to call owners, owners (please explain that I just got Criminal Justice Reform passed, Black unemployment is at the lowest level...

Trump noted that he hadn't yet invited the team but that he was now doing so. "I am now inviting the TEAM, win or lose," he said, calling himself "a big fan." Rapinoe, however, "should WIN first before she TALKS! Finish the job!" he added. The spat marked the latest politicization of what used to be the relatively innocent tradition of presidents treating successful athletes to a tour of the nation's most famous address.

Team USA's defensive keystone Ali Krieger rushed to Rapinoe's side. "I stand by @mPinoe & will sit this one out as well," Krieger, who is also outspoken on gay rights, tweeted back at Trump. Upping the temperature in the dispute, she referred to multiple women's allegations that they were sexually assaulted by Trump. The president says he has always been falsely accused, including by women seeking to extort money.

"In regards to the 'President’s' tweet today, I know women who you cannot control or grope anger you," Krieger wrote to Trump. "I don't support this administration nor their fight against LGBTQ+ citizens, immigrants & our most vulnerable."

Rapinoe has form, having supported former NFL star Colin Kaepernick's decision to kneel, rather than stand, during the playing of the national anthem at games to protest racism and police brutality. She initially also kneeled, but then shifted to standing with the rest of the team while refusing to sing or place her hand on her heart.

Champion NBA teams have not visited the White House since Barack Obama left office and this year's basketball kings, the Toronto Raptors, will not come if they do get an invite, according to guard Danny Green.

In 2018, Trump himself issued a last-minute cancelation of his invite to the NFL Superbowl-winning Philadelphia Eagles because of support in the team for kneeling in protest during anthems.