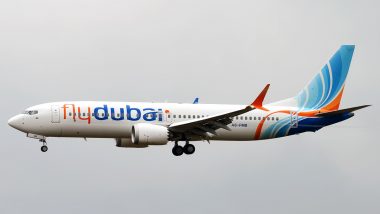 Tel Aviv, November 4: Dubai's budget airline Flydubai will soon start direct flights to Israel's city of Tel Aviv. The direct commercial flight service to Tel Aviv will start from this month. The announcement was made by the airline on Wednesday. The development came almost two months after the United Arab Emirates and Israel signed a peace deal to normalise ties. Flydubai will operate 14 flights a week. Israel, Bahrain to Commence Formal Diplomatic Ties at Special Ceremony in Manama.

Last month, Israeli farmers and companies received permission to export agricultural produce to the UAE. As Israel's agriculture Ministry, export costs to the UAE will be low due to the geographical proximity between the two countries and the logistical options for transportation.

On September 15, Israel had signed agreements to normalise diplomatic ties with the UAE and Bahrain at the White House. Israel, the UAE and Bahrain inked "Abrahan Accords" brokered by US President Donald Trump. Notably, the United Arab Emirates (UAE) and Israel became the third and fourth Arab countries to establish diplomatic relations with Israel after Egypt and Jordan. Egypt signed a peace deal with Israel in 1979, while Jordan inked peace pact in 1994.

(The above story first appeared on LatestLY on Nov 04, 2020 04:51 PM IST. For more news and updates on politics, world, sports, entertainment and lifestyle, log on to our website latestly.com).