n a tragic incident, two people have been beheaded and a third person has died in a suspected terror attack in the south of France. According to a report on the Mirror UK, mass stabbing took place at Notre-Dame basilica in Nice at around 9 am on Thursday. 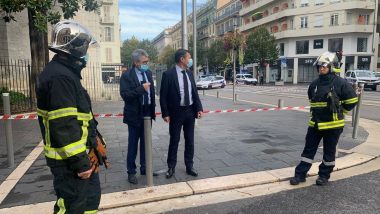 France, October 29: In a tragic incident, one woman was beheaded by an attacker with a knife who also killed two other people. According to a report on the Mirror UK, mass stabbing took place at Notre-Dame basilica in Nice at around 9 am on Thursday at a time when the morning mass had just started.

As per reports, the accused was promptly arrested. Police operations are underway in order to find more details on the case. Second Wave of COVID-19: From Germany to France, List of Countries Going Into Lockdown 2 After Fresh Surge in Coronavirus Cases.

The city's mayor, Christian Estrosi suggested that the attack was due to terrorism. He also confirmed that the perpetrator was arrested. This attack is on the back of the murder of the French schoolteacher Samuel Paty, who was beheaded in Paris this month by a suspected Islamist after he used caricatures of the Prophet Muhammad in a class on freedom of expression, according to a Telegraph UK report.

(The above story first appeared on LatestLY on Oct 29, 2020 04:27 PM IST. For more news and updates on politics, world, sports, entertainment and lifestyle, log on to our website latestly.com).