Tensions between Israel and Palestinian militant groups in the Gaza Strip have continued unabated for a seventh consecutive day, as the death toll in the coastal enclave climbed to 181, officials said. 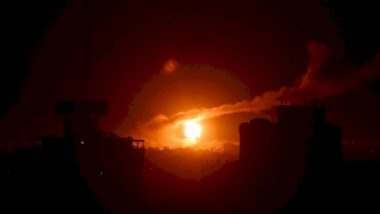 Gaza, May 17: Tensions between Israel and Palestinian militant groups in the Gaza Strip have continued unabated for a seventh consecutive day, as the death toll in the coastal enclave climbed to 181, officials said.

The Hamas-run Health Ministry in Gaza said in a statement on Sunday that since the escalation began on May 10, 181 Palestinians have been killed, including 52 children and 31 women, and 1,225 others had different injuries, reports Xinhua news agency.  World News | Israel Kills 42 in Gaza as Netanyahu Warns War Will Go on

Militant groups, led by the armed wing of the Palestinian Islamic Resistance Movement (Hamas), fired barrages of rockets from the Gaza Strip at cities and towns in central and southern Israel.

Israeli fighter jets intensified its airstrikes on buildings, military posts and facilities affiliated with the militants all over the strip, according to security sources.

The sources said that the houses of Hamas chief in the Gaza Strip Yehya Sinwar and his brother were destroyed in the intensive Israeli airstrikes waged on the southern city of Khan Younis, adding that no injuries were reported.

Ashraf al-Qedra, spokesman of the Health Ninistry in Gaza, told reporters that late Saturday night and on Sunday morning, 23 Palestinians were killed and over 50 wounded in the airstrikes on Gaza.

An Israeli army spokesman said that in the last 24 hours, fighter jets struck 90 targets that belong to Hamas and the Islamic Jihad in Gaza, including the houses of Sinwar and his brother Mohammed.

The spokesman said that Gaza militants fired more than 120 rockets towards Israel, adding that the Iron Dome Air Defense System has intercepted most of them.

Since May 10, more than 2,300 have been fired by the Hamas, according to Israel's Army.

Israel has since responded with airstrikes and artillery shelling, striking more than 650 targets.

According to Israel's Magen David Adom rescue service, 10 people were killed and 636 injured in the Jewish state as a result of the rocket fire.

Meanwhile, Palestinian sources said there were regional and international efforts to reach a humanitarian ceasefire between the two sides.

The sources told Xinhua that Egypt has been trying to pressure the two sides to declare a temporary humanitarian ceasefire to alleviate the suffering in Gaza until a permanent truce is reached.

They added that the Egyptian proposal "is under discussion by the Palestinian factions and will be on the table of Israeli cabinet for discussion on Sunday".

(The above story first appeared on LatestLY on May 17, 2021 12:03 PM IST. For more news and updates on politics, world, sports, entertainment and lifestyle, log on to our website latestly.com).