Japan is suspending the entry of all non-resident foreign nationals into the country to curb the spread of coronavirus (COVID-19), Prime Minister Yoshihide Suga said Wednesday. 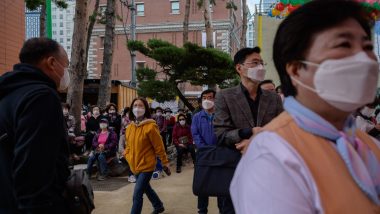 The Japanese government had last month banned the entry of foreign nationals following the emergence of a more infectious strain of coronavirus. However, business travellers and students from Taiwan, Brunei, Cambodia, China, Laos, Malaysia, Myanmar, Thailand, Singapore, South Korea and Vietnam were exempted. Now, the government imposed a blanket ban on the entry of all non-resident foreign nationals. The exemption is suspended reportedly after lawmakers within Suga's Liberal Democratic Party objected to it.

Earlier today, The Japan Times reported that COVID-related emergency is set to be expanded to Osaka, Kyoto and Hyogo prefectures in the Kansai region, as well as Aichi and Gifu prefectures. Media reports also said Tochigi and Fukuoka prefectures would be brought under the declaration, too, as cases continue to rise nationwide. Coronavirus Mutant: Japan Conducts Genetic Analysis of COVID-19 on Two Japanese Citizens Who Arrived from UK.

"Beginning with Osaka, we'll look at the situation in prefectures where the situation is serious and, after consulting experts, promptly decide on (whether to declare) a state of emergency," Chief Cabinet Secretary Katsunobu Kato, the government spokesperson, was quoted as saying.

(The above story first appeared on LatestLY on Jan 13, 2021 04:22 PM IST. For more news and updates on politics, world, sports, entertainment and lifestyle, log on to our website latestly.com).