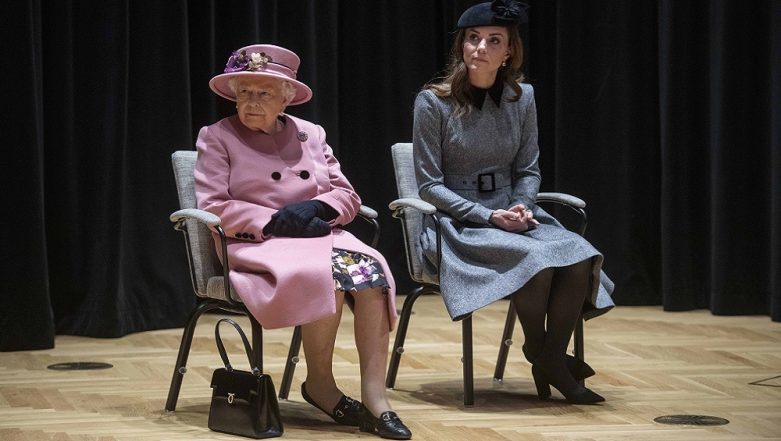 Washington D.C, April 30: Kate Middleton has been named as the Dame Grand Cross of the Royal Victorian Order, the highest possible rank. The honour was a gift from Queen Elizabeth to her granddaughter-in-law on the eighth wedding anniversary of the Duchess of Cambridge.

The ruling monarch personally selects its recipient, as reported by People. The Royal Victorian Order was created by Queen Victoria in 1896 to allow her to recognize people who helped her or represented her. The Fellow Knights and Dames Grand Cross include the Queen's sons Prince Andrew and Prince Edward as well as Camilla, Duchess of Cornwall. Is Kate Middleton Ready For Baby No 4? The Duchess Responds!

The position of Grand Master of the Order was created in 1937 and was occupied by the Queen Mother until her death in 2002. Queen Elizabeth then appointed her daughter, Princess Anne, to the spot in 2007. The Queen's husband, Prince Philip, was made a Knight Grand Cross of the Royal Victorian Order in 2017 on the couple's milestone 70th wedding anniversary. Lower ranks in the Order are often given to palace employees and long-standing staffers for their dedicated services.

Prince Harry was named a Knight Commander of the Royal Victorian Order in 2015. Prince Harry, last week while accompanying Kate to the Anzac Day Service of Commemoration and Thanksgiving at Westminster Abbey in London, was spotted wearing the Maltese cross that serves as the symbol of his position around his neck. The badge for a Knight or Dame Grand Cross features an ornate Maltese cross surrounded by an eight-pointed silver star. The size of the badge gets larger as the ranks increases. The honour comes just weeks after Kate and the Queen stepped out for their first-ever joint outing when the duo visited King's College's Strand campus in London.