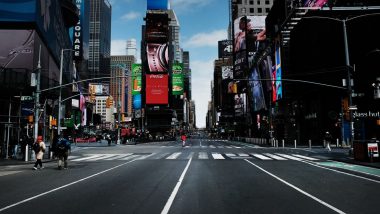 New York, August 4: Images of Lord Ram would not be beamed from the Nasdaq billboard at New York City's iconic Times Square. Despite Indian-American groups planning in advance for celebrating the Bhumi Pujan of Ram Mandir in Ayodhya on August 5, their advertisements would not be put up on major billboards due to a petition by Muslim groups. Ram Mandir Proposed Model Pictures Shared by Shri Ram Janmbhoomi Teerth Kshetra Ahead of Foundation Laying Ceremony in Ayodhya on August 5.

A coalition of Muslim outfits based in New York, according to reports, had petitioned the ad companies asking them not to advertise "right wing Hindu groups" who want to celebrate the construction of temple on the site in Ayodhya where once a mosque stood.

Among the billboards which the Indian-American groups wanted to book for August 5 included the iconic Nasdaq screen and the 17,000-square-foot wrap-around LED display screen -- considered as the largest outdoor advertisement space in the world.

ImanNet, one of the Muslim groups part of the coalition, reportedly issued a statement claiming that they had urged the New York Mayor, City Council of New York , the Governor, Senators and Members of House of Representatives to stop "right wing Hindu groups" from advertising the construction of temple on the site that was considered as disputed.

President of the American India Public Affairs Committee Jagdish Sewhani had, while speaking to news agency PTI last week, claimed that a grand celebration was being planned for Wednesday, when India's Prime Minister Narendra Modi would be laying the foundation stone for the Ram temple in Ayodhya.

Sehwani had claimed that several billboards at the Times Square, including the Nasdaq, would be beaming images of Lord Ram, the model of temple, 3D portraits, videos and the words "Jai Shri Ram" written in English and Hindi.

(The above story first appeared on LatestLY on Aug 04, 2020 03:56 PM IST. For more news and updates on politics, world, sports, entertainment and lifestyle, log on to our website latestly.com).