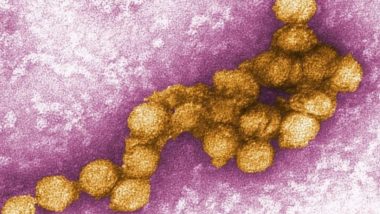 The patient, described only as an "elderly resident" living in the South Los Angeles area, was hospitalized and died from West Nile virus-associated neuro-invasive disease, Xinhua news agency quoted a statement issued by the county's health department as saying on Wednesday.

"We encourage residents to check for items that can hold water and breed mosquitoes, both inside and outside their homes, and to cover, clean or clear out those items."

Humans get the virus through the bite of an infected mosquito, although most mosquitoes do not carry the virus.

There is no specific treatment for the disease and no vaccine to prevent infection, according to the public health department.

It is estimated that there are more than 10,000 infections of the disease countywide every year.

However, most people's symptoms would be too mild to be recognized.

A total of five cases have been registered in the Los Angels county so far this year.

(The above story first appeared on LatestLY on Aug 13, 2020 01:44 PM IST. For more news and updates on politics, world, sports, entertainment and lifestyle, log on to our website latestly.com).