MacKenzie Scott, the ex-wife of Amazon CEO Jeff Bezos, married a Seattle science teacher Dan Jewett. Recently, Jewett pledged to donate his significant amount of wealth to the underprivileged. He is a Chemistry teacher at the private Lakeside School. 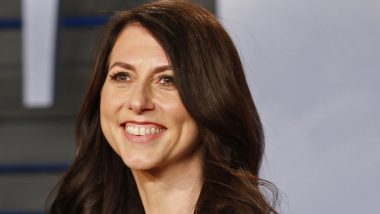 Jewett made an announcement about the marriage on the website of the Giving Pledge, a non-profit organisation. Notably, the Giving Pledge is a movement created by Bill and Melinda Gates and Warren Buffett to encourage philanthropists. “In a stroke of happy coincidence, I am married to one of the most generous and kind people I know -- and joining her in a commitment to pass on an enormous financial wealth to serve others,” Jewett wrote. Amazon Founder Jeff Bezos, Wife MacKenzie To Divorce After 25 Years of Marriage.

The 50-year-old Scott donated around USD 1.7 billion to groups involved in philanthropic causes such as healthcare, LGBT rights and racial justice last year when the world was grappling to fight against the COVID-19 pandemic. She donated the money to 116 NGO, universities and community development groups.

Scott is currently the 22nd richest women in the world. As per a report by The Associated Press, Scott donated a total of USD 5.7 billion in 2020. She was the second place among 50 Americans who donated the most in 2020. Bezos and Scott divorced in 2019 after 25 years of marriage. She is also a novelist.

(The above story first appeared on LatestLY on Mar 08, 2021 11:19 AM IST. For more news and updates on politics, world, sports, entertainment and lifestyle, log on to our website latestly.com).