Mahatma Gandhi 150th Birth Anniversary: US Pays Tribute to the Apostle of Peace, Kicks Off Year-Long Celebration at Capitol

When he was going to India, Martin Luther King said: "To other countries, I may go as a tourist, but to India I come as a pilgrim." Speakers said Gandhi's message of peace and non-violence is much more relevant today than any time ever. 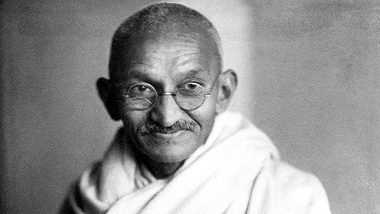 Washington, November 28: Top US lawmakers and eminent Indian-Americans kicked off the year-long 150th birth anniversary celebrations of Mahatma Gandhi at the US Capitol paying glowing tributes to the apostle of peace, with speakers describing his preaching of non-violence as more than ever relevant in today's world. The Indian Embassy organised the event in association with over half a dozen Indian-American organisations, speakers including Congressmen talked about Gandhi's influence around the world including his influence on top civil rights leader Martin Luther King.

When he was going to India, Martin Luther King said: "To other countries, I may go as a tourist, but to India I come as a pilgrim." Speakers said Gandhi's message of peace and non-violence is much more relevant today than any time ever. "There's absolutely no way possible that I could be standing before you in the absence of Mahatma Gandhi. Why is that? I think that all of you know what a profound influence he had on Martin Luther King Jr and the civil rights movement here in the United States," Indian American Congressman Raja Krishnamoorthi said in his address at Capitol Hill celebration of "150 Years of Mahatma Gandhi." Mahatma Gandhi 150th Birth Anniversary: Narendra Modi, President Kovind, Rahul Gandhi Remember ‘Father of the Nation’; Leaders Pay Homage at Rajghat.

"Without that civil rights movement, without the breaking down of the racial barriers that held so many people back in this country, there is no way that people who look different than some of the previous occupants of my office could have come to the fore and that includes me," the Indian-American Congressman who was reelected for the second term early this month said. Indian-American Congressman Dr Ami Bera, who was elected for the fourth consecutive term this past November, said the message of peace and non-violence of Mahatma Gandhi is more relevant today than ever.

Among others Congressman David Schweikert also addressed the gathering.

Indian Ambassador to the US Navtej Singh Sarna, said it is time to apply the teachings and message of Mahatma Gandhi to "our" lives. "It's so very appropriate that this event is being held in the House of the Lawmakers because I think people like Raja (Krishnamoorthi), working with a vision of society… and I think anybody who's a visionary, who was looking at creating a society, correcting the wrongs of society cannot but take inspiration from Mahatma Gandhi whose entire life, as he had said, my life is my message," Sarna said.

"We know him as the father of the nation. We know him as the person who led India epic freedom struggle against colonialism and actually got us freedom. But I think he was much more than that," Sarna said. "He was one of those rare human beings who actually lived his life to his own standards, which he had set, which nobody asked him to set, which he discovered for himself those standards and he set his lives and he made sure that he stuck to that and when he could not he also repented," he added. Mahatma Gandhi gave a new dimension to non-violence -- an eternal, natural and the highest human value, in theory and practice, said eminent Indian-American Dr Bharat Barai from Chicago.

"As the best and true representative of Indian Culture of his time, Gandhi was a peacemaker's mentor," he said. "Like other mentors of the world who were born from time-to-time on the Indian soil, Gandhi's ideas and practices became equally adaptable in his own time for millions of his own countrymen and women on the one hand," he said. "On the other hand they proved to be the guiding force for people of many countries of the world, including here in the United States where Dr. Martin Luther King successfully adopted Gandhiji's model of peaceful civil disobedience to secure equal rights for African Americans," he said. "As Congressman John Lewis proudly says, if there was no Gandhi, there would be no Dr. Martin Luther King and there would be no Barack Obama," Barai said.