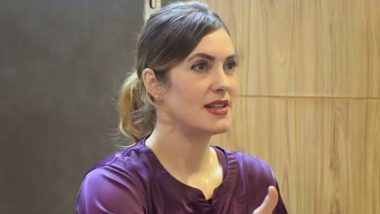 Islamabad, June 6: Cynthia D. Ritchie, an American blogger who is now based in Pakistan, has made shocking 'Me Too' allegations against several Pakistan People's Party (PPP) leaders over the last few weeks. Ritchie made  allegations of rape and assault dated back to 2011 against some top PPP leaders including Pakistan's former interior minister Rehman Malik, the then federal health Minister Makhdoom Shahabuddin and former prime minister Yousaf Raza Gilani. The blogger accused former interior minister Senator Rehman Malik of having raped her in Islamabad in 2011 and blamed Gilani and Shahabuddin for molesting her.

In a series of tweets, Ritchie said she was physically manhandled by the then federal health minister Makhdoom Shahabuddin and also by former Prime Minister of Pakistan Yousaf Raza Gilani. Ritchie went live on social media platform Facebook and alleged that she was raped by the then interior minister Rehman Malik. She accused former federal minister Makhdoom Shahabuddin and ex-prime minister Yousuf Raza Gilani of "physically manhandling" her while Gilani was staying at the "President's House in the year 2011. Meesha Shafi Accuses Ali Zafar of Sexual Harassment: Female Pakistani Singer Says Ali Sexually Harassed Her on Multiple Occasions.

According to reports, Gilani has denied the charges and said responding to such allegations, “humiliation and disgrace”. The Former PM, while talking to ARY News, questioned as to what Richie was doing at the Presidency when she was allegedly manhandled, and why she had been staying in Pakistan.

Taking to Twitter, Gilani's son Ali Hiader Gilani denied the charges levelled by Ritchie and said they were baseless. However, the other two former ministers have not so far responded to the allegations.

I had gone to the @cybercrimefia against cynthia’s baseless allegations on our party leader, late Benazir Bhutto shaheed. So this #muftkhorcynthia decided to attack my father former prime minster Syed Yusuf Raza Gilani. He has responded to her filthy allegation.1/3 https://t.co/oHB8gIW3zj

Before going live on Facebook, Ritchie alleged members of PPP were threatening her because "they know that over the years I have been raped/assaulted by men in the highest ranks of PPP. They don't want the world to know.

#Shocking I was raped by Ex-Interior Minister Rahman Malik at the President House In #Islamabad , & psychically manhandling by Former PM Yousaf Raza Gillani and other minister says @CynthiaDRitchie

This is too serious allegations Must be investigate #Pakistan #MeToo pic.twitter.com/SgA6iDKJVa

And, yes, I did tell someone at the UsEmb in 2011, but due to 'fluid' situation and 'complex' relations between US and Pakistan, response was less than adequate.

I've been engaged to a wonderful man who I met in 🇵🇰. He encouraged me to speak out, so we can move on as a couple. https://t.co/PpfdF9Fuib

There is much more. But now I need a few days to rest and be alone with my fiance. I'm tired.

I ask the PPP leadership @BBhuttoZardari to tell its people to leave my family alone.

I will be ready to meet any and all investigators, as is required by law, as early as next week.

The blogger tweeted saying that recently the PPP members attacked her family. "I've had it. Ready to face any accuser," she said, adding that she is now engaged to a man whom she met in Pakistan, and it was him who encouraged her "to speak out, so we can move on as a couple". In another tweet she urged people of the PPP leadership to tell its people to leave my family alone. "I will be ready to meet any and all investigators, as is required by law, as early as next week", she said.

(The above story first appeared on LatestLY on Jun 06, 2020 02:16 PM IST. For more news and updates on politics, world, sports, entertainment and lifestyle, log on to our website latestly.com).