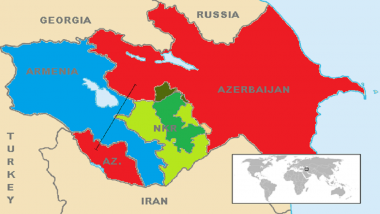 Karabakh, October 10: A ceasefire agreed by Armenia and Azerbaijan came into effect from Saturday from 8:00 am GMT. Both the countries also agreed to start "substantive" talks over Nagorno-Karabakh, a disputed territory, as part of a peace deal. The ceasefire came into effect after two weeks of intense fighting in Nagorno-Karabakh. Armenia, Azerbaijan Agree to Ceasefire: Russian Foreign Minister.

Both Armenia and Azerbaijan agreed for a ceasefire after 10 hours of talks held in Moscow in the early hours of Saturday morning. Fighting broke out on September 27 in the region, which is located within Azerbaijan and under the control of local ethnic Armenian forces. It is some of the worst in Nagorno-Karabakh and surrounding areas since the end of a war in 1994.

As per reports, at least 300 people were killed due to the clashes. The international community had urged both Armenia and Azerbaijan for negotiations to bring peace in the area.

(The above story first appeared on LatestLY on Oct 10, 2020 03:26 PM IST. For more news and updates on politics, world, sports, entertainment and lifestyle, log on to our website latestly.com).