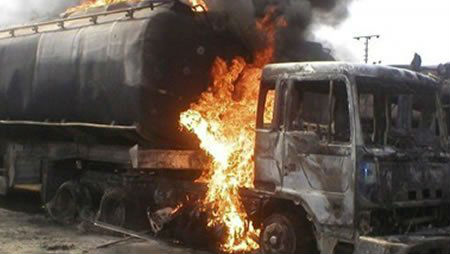 Lagos (Nigeria), May 7: At least 55 people were killed and 37 were injured in an oil tanker explosion in Nigeria, authorities say. The explosion happened late Sunday on the road leading to the airport in Niamey, the capital of the West African country, the CNN reported. The victims were trying to collect the spilt oil from the overturned tanker. Another 37 people were injured in the explosion, Interior Minister Mohamed Bazoum said in a Twitter post.

Bazoum visited the site of the accident with President Issoufou Mahamadou and posted in French on his Twitter account: "This morning with the #PM at the site of a tragedy at the Airport district following the overturning of a tanker truck not far from a gas station. While some residents were trying to siphon gasoline, the truck exploded."

The President also visited some of the injured in a hospital and called the incident a "national tragedy." "I would like to extend my most heartfelt condolences to the bereaved families. May the departed rest in peace and speedy recovery to the wounded," he said.