Kevin Stitt, the Governor of the US state of Oklahoma, said that he has tested positive for novel coronavirus, becoming the first Governor to publicly confirm the infection since the pandemic hit the country. 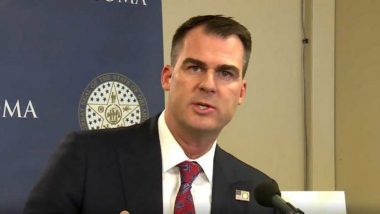 Washington, July 16: Kevin Stitt, the Governor of the US state of Oklahoma, said that he has tested positive for novel coronavirus, becoming the first Governor to publicly confirm the infection since the pandemic hit the country.

"I got tested yesterday for COVID-19 and the results came back positive," Stitt said on Wednesday.

"I feel fine; I felt a little bit achy yesterday."

The Republican Governor said he was isolating himself from other family members and working from home, reports Xinhua news agency.

According to a local media report, Stitt led a meeting of the Commissioners of the Land Office on Tuesday.

He wore a mask around his neck, instead of covering his mouth with it, when hosting the meeting and answering reporters' questions afterwards.

Despite his test, Stitt didn't think it was necessary to reinstate lockdown measures, saying that "going back and bunkering in place doesn't remove" the virus.

"It's way way premature to think of slowing down or backing up," he said.

Oklahoma has seen a record increase of cases since President Donald Trump held a campaign rally in the city of Tulsa on June 20, which Stitt also attended.

The state recorded a total of 21,783 cases as of Tuesday, up 993 cases compared to the previous day, according to the latest data from Oklahoma State Department of Health.

Particularly in Tulsa, a senior local health official said the surge in cases might be linked to the Trump rally and the protests against it that happened at the time.

(The above story first appeared on LatestLY on Jul 16, 2020 09:47 AM IST. For more news and updates on politics, world, sports, entertainment and lifestyle, log on to our website latestly.com).