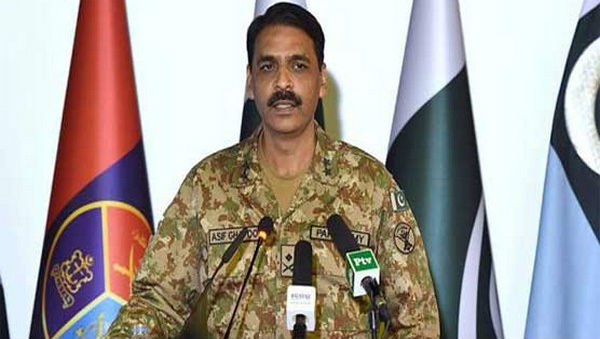 Islamabad, December 25: It takes a long time to develop a bad habit and as much or longer to stay away from it. The quote has been proved correct as Pakistan Army on Wednesday once again started peddling diabolic narratives against 'Hindutva', that too on the occasion of Christmas.

Christmas is a time when the entire world unites to celebrate love and warmth, but Pakistan, as usual, took it as a chance to spew venom against India.

Wishing "very Merry Christmas to Christians in Pakistan and across the globe" the Army spokesperson, Major Gen Asif Ghafoor, added, "especially to the ones in the states of Odisha and alike under the Hindutva obsessed environment. Jammu And Kashmir: Indian Army Soldier Martyred in Ceasefire Violation by Pakistan.

"Ghafoor's tweet is an irony over the situation that the Muslim-majority country which does not take any measure to secure and uplift the minorities on its soil, including Christians, Hindus, Balochs, Ahmadiyyas and others, is formally wishing the latter on the occasion of Christmas.

Very Merry Christmas to Christians in Pakistan, across the globe and especially to the the ones in the states of Odisha and alike under the Hindutva obsessed environment.#MerryChristmas#BeginningOfEnd pic.twitter.com/XFOnUjnMz6

Minorities in Pakistan, especially Christians, are facing constant discrimination and persecution by state and non-state agencies. Abusive enforcement of Pakistan's blasphemy laws has further suppressed the lives of minorities. The law enforcement agencies have also been observing the situation as bystanders with religious extremists taking control of the discourse.

The Asia Bibi case is one of the burning examples of such atrocities, whereby the victim faced death row after being framed wrongly and had to leave the country in spite of being acquitted by their top court. The Christian woman is now residing away from her homeland, in Canada.

The United States-led Commission on International Religious Freedom has said in its annual report this year that religious extremists in Pakistan have regularly attacked minorities with impunity. It said that massive human rights violations were being carried out against Hindus, Christians, Sikhs and Shi'a Muslims. It is a fact that various international organisations, including the United Nations, have taken note of the situation in Pakistan, but have refrained from directly intervening into the issue so far.