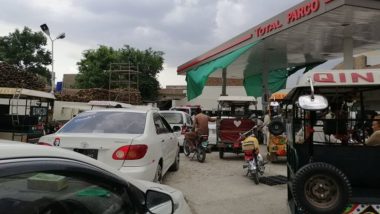 Islamabad, June 6: Pakistan is facing a shortage of petrol and diesel amid the ongoing coronavirus crisis. According to reports from Pakistan-based media houses, fuel stations were closing shutters in Lahore, Peshawar, Karachi and Quetta. In a statement, All Pakistan Petroleum Retailers Association (APPRA) has said that existing stocks of petrol and diesel are likely to run dry over the weekend. MeToo Hits Pakistan: Cynthia Ritchie, an American Blogger, Says Pakistan’s Ex-Interior Minister Rehman Malik Raped Her, Former PM Yousuf Raza Gilani Molested Her.

"The situation seems to be going from bad to worse until Sunday," Sameer Najmul Hassan, chairman at APPRA, was quoted in the statement. Pakistan's The News reported on June 4 that the fuel shortage in Balochistan led to scarce supply at Quetta pumps. "Long queues of vehicles waited to buy the limited supply of petrol from three to four stations at high prices," the report mentioned.

The situation remained grim in Karachi where petrol pump owners said that they had little choice but to increase prices owing to the shortage in supply. Pump owners have threatened to close operations if the shortage in supply of petrol and diesel persisted. The Imran Khan government has blamed oil marketing companies for "artificial shortage". Pakistan's Power and Petroleum Minister Omar Ayub Khan maintained that there was no shortage.

Worst situation in #Bannu, I think all over #Pakistan. I asked a rickshaw driver to give me a half liter #Petrol, He said please " don't ask me for it. There's #petrolshortage, I've children and Rickshaw is the only source for livelihood" These words has broken me. #petrolshortag pic.twitter.com/vGQxjM5Hgn

According to a Dawn report, oil companies have slammed Directorate General of Oil under the Petroleum Division, accusing it of "having mismanaged the situation through knee jerk decisions and changing common decisions by all the stakeholders". The country's petroleum division, the report said, has stated that there are 272,000 tonnes of petrol and 376,000 tonnes of diesel which is good enough to cover 12 days and 17 days, respectively.

Province-wise data collected and shared by local media outlets highlighted that different parts of the country have varying stockpiles of fuel. Some regions have supplies that would last just four days, while some, like Sindh, have stocks to cover the next 20 days. Reports suggest that the situation arose after the Imran Khan government "first cancelled oil imports and changed berthing schedule of some favourite entities".

(The above story first appeared on LatestLY on Jun 06, 2020 05:16 PM IST. For more news and updates on politics, world, sports, entertainment and lifestyle, log on to our website latestly.com).